The Kardashians Series Review: The Iconic Family Returns With an Even More Redundant Take on the Same Old Concept (LatestLY Exclusive) 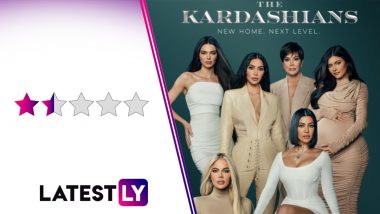 With The Kardashians, we see the family again after a year since Keeping Up With the kardashians ended. So you find their personalities to have changed a bit, and you explore them in this new realm of lifestyle. Supposedly a more serious and business-like tone to their approaches. Don’t let that fool you though, it still very much focuses on their personal lives.

The drama, for those who are looking for it, is still present. There is very much the same amount of it present over as there was in their previous outing. You have Kim calling up Kanye here because their son found their sex tape on Roblox, Khloe and Tristan are going through their own hardships and Kylie is expecting her son.

For the people interested? Yeah, this show is definitely made for those who want to see more of this family. Other than that, there is nothing else about it that makes it special. One big difference the show does have compared to Keeping Up With the Kardashians is that it feels even more like a documentary this time around. But it still doesn’t stop feeling like a retread. The Kardashians Trailer: The Sisters Are Welcoming You Back Into Their Lives, Travis Baker and Pete Davidson Become the New Additions to the Family (Watch Video).

Even for the family itself, the opinions that you have on them, I personally am not a fan, but watching them here felt like seeing someone extremely out of touch with reality. For all the entertaining real life drama, this was just something that I couldn’t get into at all.

Kardashian Fans Will Be Satisfied

The Kardashians definitely was made for the Kardashian fans which doesn't help, because this still felt like a retread and something I really just couldn’t care about. Not to mention, it already makes an out-of-touch family make it look like it’s even more out of touch with this world. The Kardashians is streaming right now on Disney+ Hotstar.

(The above story first appeared on LatestLY on Apr 21, 2022 02:30 PM IST. For more news and updates on politics, world, sports, entertainment and lifestyle, log on to our website latestly.com).