The Old Guard revolves around a group of immortal mercenaries who are 'difficult to kill'. They have been alive for centuries, protecting the world while fighting in shadows. 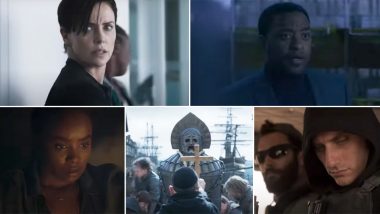 Charlize Theron is signing some pretty amazing projects these days. After much-acclaimed Bombshell that even won an Academy Award in the best makeup and hairstyle category, she returns as a mercenary in Netflix's The Old Guard. As the name suggests, the movie revolves around a group of soldiers who are 'difficult to kill'. They have been alive for centuries, protecting the world while fighting in shadows. But like any good creature on this planet, they are being hunted and they need to survive. Charlize Theron Shares Throwback Picture with Daughter Jackson on 'Mad Max: Fury Road' Set.

Theron's character Andy is also looking out for a new member who's blessed with the same powers. The new member in question is a teenage girl, who like others has the ability to heal herself. Theron's badass avatar in The Old Guard will remind you of Furiosa in so many ways. Andy and Furiosa share the same determination to survive and fight their enemies against all odds. For ones who loved Theron in Fury Road would find themselves cheering for her in this new Netflix release. Charlize Theron Launches 'Together For Her' Campaign as a Global Fight Against Domestic Violence During COVID-19 Crisis.

Directed by  Gina Prince-Bythewood, The Old Guard will keep shuffling back and forth in time to give us an insight into the lives of these immortal warriors. It's an adaptation of a graphic novel and seems like a worthy adoption. Theron has plenty of action scenes that will keep you on the edge of your seats and we are definitely looking forward to her new outing. The movie is slated to release on Netflix on July 10.

(The above story first appeared on LatestLY on May 21, 2020 09:33 PM IST. For more news and updates on politics, world, sports, entertainment and lifestyle, log on to our website latestly.com).