The Raikar Case Trailer: This Atul Kulkarni, Neil Bhoopalam Starrer Series Promises to be an Intriguing Whodunnit With a Family Twist (Watch Video)

The star cast of the series is also promising with actors such as Atul Kulkarni, Neil Bhoopalam, Ashwini Bhave, Parul Gulati, Kunal Karan Kapoor among others in lead roles 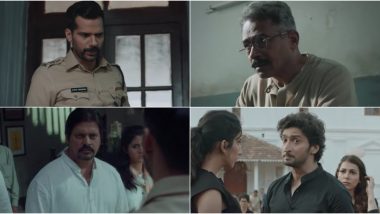 With everyone sitting at home amid the coronavirus lockdown, there's no better time for new digital series to release. The trailer of Voot Select's upcoming series titled The Raikar Case was dropped recently and it surely looks intriguing. The series comes across as a thrilling whodunnit revolving around a family. With each member as the suspect, it seems to be an interesting plot involving lies, betrayal and more. The star cast of the series is also promising with actors such as Atul Kulkarni, Neil Bhoopalam, Ashwini Bhave, Parul Gulati, Kunal Karan Kapoor among others in lead roles. Asur Season 1 Review: Arshad Warsi, Barun Sobti’s Thriller Series Succeeds in Keeping the Mystery Alive and Binge-Worthy.

Bhoopalam essays the role of the cop who is the investigating officer on this complicated case. The series' main plot revolves the youngest member of the family Tarun committing suicide and blaming the family for his death. Although is it really a suicide or murder is the question. The Raikar family is hiding some dark secrets that make this series an interesting ride. Tightly packed in seven-episodes, it looks like this show will be the next thing everyone will be binging on. Asur: Arshad Warsi to Make His Digital Debut with a Psychological-Thriller Series.

The series has been helmed by Aditya Sarpotdar. The series also claims to be inspired by true events. The Voot Select handle dropped the trailer of the series with an interesting caption saying, "Meet the Naik Raikars: a family that shakes your definitions of the word. This isn't just any family. It's a family, framed." The show is all set to begin streaming from April 9, 2020. After Voot Select's latest serving of Asur which received amazing responses, it will be interesting to see how this one turns out.

(The above story first appeared on LatestLY on Apr 04, 2020 05:55 PM IST. For more news and updates on politics, world, sports, entertainment and lifestyle, log on to our website latestly.com).