Vir Das - Outside In Lockdown Special Review: Not The Gags But The Sincere Intentions Make You Adore This Netflix Stand-Up Act

Vir Das: Outside In Lockdown Special streams on Netflix today. Before you watch the act, here's a disclaimer. Don't approach it like a stand-up act and you will enjoy it better. 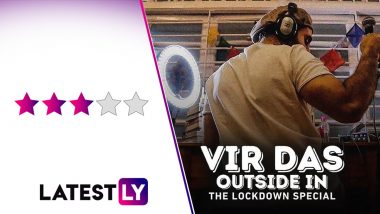 Vir Das: Outside In Lockdown Special review: We all have certain lockdown experiences, good, bad or ugly and we think there's no greater peril than what we went through. But then we speak to others (virtually) and realise people are in much tougher situations. Vir Das: Outside In Lockdown special tries to highlight the same in a light-hearted manner and succeeds for most parts. It was done for charity. Vir Das Urges Celebrities Not to Post Videos on Social Media of Their COVID-19 Tests (View Post)

It is important to tell you here that if you are watching this show assuming you will get a few good laughs, that will be a wrong approach. The act is more about connecting people from many corners of the world virtually with Vir to have a few hours of a good time while locked at home. The entire exercise was shot when we were in an unending and constantly revived lockdowns due to the COVID-19 pandemic.

Vir Das trapped in his house (just like us) in Bandra (not like us) interacted with people from across the world and exchanged a few jokes here and there at their expense, of course. He connected with people in London, Mumbai, New York, Costa Rica, Spain, Singapore, Canada and many such places. The audience ranged from 17 years of age to any extreme with Das being 40 himself (because he said so). Their stories may not be as devastating as that of the migrants walking back home but they still manage to get you. There's a kid who was supposed to go study in the US but now it's uncertain, a health care worker who had a difficult three months, an Indian doctor who contracted COVID while on duty...these stories do keep you interested.

What keeps it a lot real is Vir giving a glimpse of his state of mind before getting into each Zoom call. He isn't perky every day and constantly being at home got to him as much as it rattled us. That made the act a lot real than a usual stand-up gig.  He spoke about the sneezing incident where a neighbour coughed at him. While at one point he is shaken by the incident, parallelly he is shown making light of the incident for some laughs from the virtual audience. Das also mentions how Jerry Seinfield and Chris Rock were discussing him at a cafe for a magazine interview. We all know comedians pick incidences from their own lives to spin a joke but it's nice to see how that comes about.

As for gags, there are a few like where Das says a bat was enough to bring the world's superpower like the US to their knees or the point where he says Indians are not used to anything that's not Pakistan's fault. The masterstroke will definitely be the Hangover sort of end credits that narrate what some of his audience members are doing now. Vir Das Feels Comedy Can Be Utilised for Positive Change As He Gears Up to Support a Charity for COVID-19 Warriors

What could come in the way of it being an invigorating and moving experience is after a while, the monotony of the scenes and questions make it seem like a drag. The forward button comes in handy there but that shouldn't be the case. That's exactly the reason why some of the jokes fall terribly flat and you later realise, that's supposed to make me laugh. That's a bummer because when it's Vir Das, expectations from a joke skyrockets. That's his own doing!

Like I mentioned before, don't watch Vir Das: Outside In Lockdown Special thinking, you will be able to laugh out loud. That would disappoint you. Watch it like a feature on life in lockdown with some gags...you will find it extremely interesting.

(The above story first appeared on LatestLY on Dec 16, 2020 02:06 PM IST. For more news and updates on politics, world, sports, entertainment and lifestyle, log on to our website latestly.com).