Don't you recall their ultimate fight? The one where Rashami Desai called Sidharth Shukla 'kachra' after throwing tea at him! 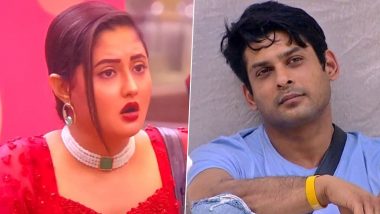 Bigg Boss 13 was quite a ride, wasn't it? Thanks to its entertaining contestants, the show enjoyed some good TRP ratings while providing its loyal viewers with wholesome entertainment. From Sidharth Shukla - Shehnaaz Gill's chemistry to Rashami Desai and Devoleena's friendship, the show was filled with amazing and violent moments that got us happy and worried at times. But that one incident that continues to astonish us even today is from the episode when Rashami threw tea at BB 13 winner Shukla after he insulted her. Bigg Boss 14: Hina Khan Says She Was the Winner Without the Trophy in New Promo of Salman Khan's Show (Watch Video).

Don't you recall their ultimate fight? The one where Sidharth Shukla humiliated her by saying, "Tujhe ab maine ghar mein lena bandh kar diya hai." His comment certainly didn't go down well with the actress and she reacted by throwing tea at him! This violent fight between Shukla and Rashami agitated Salman Khan so much so that he threatened to quit the show. The episode revolved around their verbal argument with Sidharth repeatedly saying, 'Teri Jaisi' to Rashami and abusing her in Hindi. Their argument then got out of control and this compelled other contestants like Vikas Gupta and Shehnaaz Gill to intervene.

Salman who was visibly shocked with this entire episode gave Desai a chance to explain her scenario but slammed both the contestants for their behaviour. Towards the end, he suggested the makers to find in a replacement for him 'cos he's not interested in taking this sh**. Bigg Boss 14: Contestants of Salman Khan’s Show to Be Quarantined Before Getting Locked Inside the Controversial House? (Read Details).

With Bigg Boss 14 now coming in the picture, we can't help but memorise these controversial moments from its previous season. BB 14 is slated to premiere on October 3 with Salman Khan shooting for the episode on October 1. While we have read all the rumoured names participating this season, we can't wait for the time when Khan introduces them officially. Until then, let's keep ourselves occupied with these throwback videos and instances.

(The above story first appeared on LatestLY on Sep 24, 2020 01:55 PM IST. For more news and updates on politics, world, sports, entertainment and lifestyle, log on to our website latestly.com).