At a time when limited series on OTT seem to be re-shaping audience viewing patterns, a few soaps have still managed to hold sway for over a decade. Yeh Rishta Kya Kehlata Hai, Saath Nibhana Saathiya and Taarak Mehta Ka Ooltah Chashmah have clocked in more than 10 years and are still going strong where the TRPs are concerned. 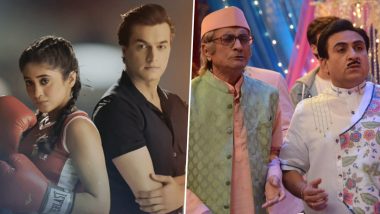 At a time when limited series on OTT seem to be re-shaping audience viewing patterns, a few soaps have still managed to hold sway for over a decade. There is a large section of the TV audience that still get their daily dose of entertainment from the longest running shows on small screen. Yeh Rishta Kya Kehlata Hai: #Kaira Trends On Twitter After Naira Played by Shivangi Joshi Falls Off The Bus and Dies!

Saath Nibhana Saathiya producer Rashmi Sharma says that it is challenging to have keep a show relevant for so many years. "It is difficult to sustain but when you have a strong team, good storyline and talented actors, it becomes easy. With any show it is important to connect with the audience at an emotional level. I think with Saathiya we have managed to do that. We have taken issues of regular Indian women and that is why most of our audience relates to it," she says.

She adds that she has made sure to maintain a certain standard in terms of storytelling throughout. "I am very happy with the steady growth of Saath Nibhana Saathiya 2. When we took it on it was a huge responsibility because Saath Nibhana Saathiya 1 had done so well previously. We had to maintain the standard and expectations of the first season. We are happy we are managing to do so," she says.

Producer Asid Kumarr Modi, whose show Taarak Mehta Ka Ooltah Chashmah, has been running for 13 years, says that the strength of the show is the fact the the content is relatable. "The audience feels that the characters are us. This is why we make sure to celebrate all festivals on the show and also made episodes on Corona. But everything is done in a humourous way. We try to keep our stories new and interesting. We have not taken a single leap, however, with the show, the characters have grown too. This offers the viewers a different perspective. So the basic format is the same but the behaviour of the characters has changed a bit," says Modi.

A look at the longest running shows currently on air:

Spanning over a period of 12 years, Rajan Shahi's Yeh Rishta Kya Kehlata Hai has always clocked in the highest ratings. The show aired its first episode on January 12, 2009. When the show began, it starred actors Hina Khan and Karan Mehra and now the show features actors Mohsin Khan and Shivangi Joshi. The show has given a lot of hit pairs including Akshay and Naitik, and Kartik and Naira. Recently, Naira was killed in the show and the makers got her back as her doppelganger Seerat. Besides the love story, the show has always been known for its larger-than-life appeal, especially when it comes to celebrations. The story has also addressed important topics such as female empowerment, sexual harassment, widow remarriage.

Produced by Rashmi Sharma, Saath Nibhana Saathiya started airing on May 3, 2010. Over the years, it has starred actors such as Giaa Manek, Rucha Hasabnis, Mohammad Nazim, Rupal Patel and Devoleena Bhattacharjee. The story line took many time leaps, including a an eight-year one in 2014 and a 10-year one in 2015. The second season of the show began in October 2020. It features Devoleena, Rupal, Sneha Jain and Harsh Nagar and Akanksha Juneja.

Airing for almost 13 years, Taarak Mehta Ka Ooltah Chashmah is a sitcom with a loyal fan base. The show has starred Dilip Joshi, Shailesh Lodha, Sunayana Fozdar, Munmun Dutta, Mandar Chandwadkar and Sonalika Joshi. It is one of the longest-running episodic shows. The story revolves around the lives of a family living in Gokuldham Society, where they co-exist with families of different backgrounds and cultures.

(The above story first appeared on LatestLY on Mar 16, 2021 02:06 PM IST. For more news and updates on politics, world, sports, entertainment and lifestyle, log on to our website latestly.com).