On the third week of March 2021, these are some interesting series and movies releasing on OTT platforms like Netflix, ALTBalaji ,Disney+ Hotstar and HBO Max.There are few Marathi and Tamil films lined up to release on Netflix, ZEE Plex and AHA Video and you might not want to miss them also. 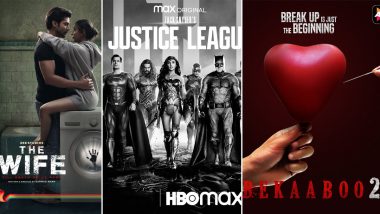 In the third week of March 2021, there are many interesting series and movies releasing on OTT platforms like Netflix, ALTBalaji ,Disney+ Hotstar and HBO Max. Talking about the biggest release of the week, it would be Zack Snyder’s Justice League, which is all set to premiere in HBO Max on March 18. It presents Justice League - the fifth film of the DC Extended Universe which is based on the DC Comics superhero team of the same name. The Wife: Gurmeet Choudhary and Sayani Datta’s Horror Film To Release on March 19.

Another big release of the week would be The Wife, which is all set to premiere in ZEE5 on March 19. Directed  by Sarmad Khan, the film is a horror movie and tells the story of a married couple who moves into a new home to find themselves being haunted by a spirit. There are few Marathi and Tamil films too that are lined up to release on Netflix, ZEE Plex and AHA Video. The list includes Tamil film Care of Kaadhal, Marathi film Avwanchit and Telegu film Kshana Kshanam. Let's quickly take a complete look at the movies and series releasing on the OTT platforms this week. Zack Snyder's Justice League: From Joker to Martian Manhunter, All The New Characters Set to Appear in Snyder Cut!

So which series/films are you most excited about? Share your thoughts in the comments section below. Stay tuned!

(The above story first appeared on LatestLY on Mar 15, 2021 09:30 PM IST. For more news and updates on politics, world, sports, entertainment and lifestyle, log on to our website latestly.com).