#Kaira has become quite a trend on Twitter. As per the latest episode, Shivangi Joshi aka Naira falls off from the cliff of a bus. Ahead, we also get a glimpse of Kartik all shattered while performing his beloved wife's last rites. Looks like fans of the serial are going bonkers with this major plot twist. 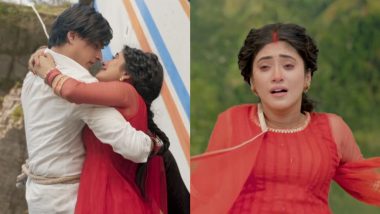 Star Plus' show Yeh Rishta Kya Kehlata Hai is one of the most loved daily soaps on television. It's been 11 years, but still, it has a huge fanbase. The serial started with Hina Khan (Akshara) and Naitik (Karan Mehra) wherein their simplicity touched hearts. Later, the show focused on Shivangi Joshi (Naira) and Mohsin Khan (Kartik). Soon their chemistry was a hit and viewers fall in love with Kaira (Kartik and Naira). However, the latest twist on the show is going to see Naira's death. Major Twist in Yeh Rishta Kya Kehlata Hai, Naira To Die In The Show (Watch Video).

As per the latest episode, Shivangi aka Naira falls off from the cliff of a bus. Ahead, we also get a glimpse of Kartik all shattered while performing his beloved wife's last rites. Having said that, this particular twist has made the of the show go bonkers and so #Kaira has become one of the hottest trends on the micro-blogging site. While some are disappointed with Naira's death, a few fans also feel this is the new beginning to Kaira's love story. Check it out. Shivangi Joshi aka Naira of Yeh Rishta Kya Kehlata Hai Refutes Rumours of Quitting the Show (Details Inside).

i have nothing more to say now...

Both the scenes broke my heart🥺💔#shivangijoshi #yrkkh #kaira #kairav pic.twitter.com/O9Z5PEC6Zu

We Hope This Is True!

Just a ray of hope...I know we can't trust them🥺

N that fear in their eyes 🥺🥺

They are just so perfect 💯

Earlier, producer Rajan Shahi had opened up about the new plot in YRKKH. In an interview with IWMBuzz, he had said, "Yeh Rishta Kya Kehlata Hai is a show that is soon to complete 3300 episodes. It has survived and stood the test of time. For me, I have always said that Shivangi and Mohsin are the best Jodi in the television industry in India. I am extremely proud of both of them. They have worked really hard. Yes, every show does get into a time where you have to come out of the comfort zone."

We also hear that is all is not well between Shivangi and Rajan. Rumour has it that the two are not on talking terms. However, nothing as been confirmed yet by the makers nor the actress. Stay tuned!

(The above story first appeared on LatestLY on Jan 06, 2021 11:49 AM IST. For more news and updates on politics, world, sports, entertainment and lifestyle, log on to our website latestly.com).