After sharing space and becoming a much-loved mother-daughter Jodi, thanks to the show, following in Hina's footsteps in Shivangi, who has bagged her first movie and co-incidentally, the movie is in the running for this year's Cannes Film Festival. 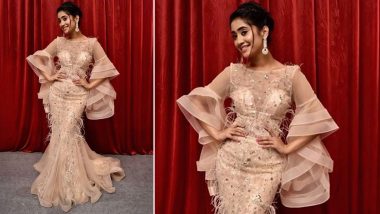 Yeh Rishta Kya Kehlata Hai's Shivangi Joshi's career graph seems to be going the same way as her ex co-star and on-screen mother Hina Khan. After sharing space and becoming a much-loved mother-daughter Jodi, thanks to the show, following in Hina's footsteps in Shivangi, who has bagged her first movie and co-incidentally, the movie is in the running for this year's Cannes Film Festival. Apart from Shivangi, Aditya Khurana and noted south actress Asifa Haque also star in the film and will play lead roles. The actors will also accompany Joshi to the French Rivera. Mohsin Khan and Shivangi Joshi's Yeh Rishta Kya Kehlata Hai To Take A Generation Leap In February 2020.

Titled Our Own Sky, the movie, a love story, is being produced by Mohammed Nagaman Lateef. The cast and crew have started shooting for the project in Mumbai.

It can be recalled that Hina Khan made the country and the Television fraternity proud in 2019 when she walked the red carpet for her debut film Lines. Not only did Hina amass critical acclaim internationally, but also made it to the headlines for being slammed by the editor of an acclaimed media organisation. Hear it! Hina Khan May Rub Shoulders with Sonam Kapoor and Deepika Padukone at Cannes Film Festival 2019.

The producer confirmed the news to SpotboyE, the producer was quoted as saying, "I roped in Shivangi Joshi for the film as besides her, I didn't find anyone who is capable enough to hold this role. I have already worked with many experienced actors so I wanted to go with someone new. Shivangi has not done much when it comes to music albums or commercials. So this film will give her the opportunity to come out of her daily soap space." Congratulations Shivangi!

(The above story first appeared on LatestLY on Jan 16, 2020 05:17 PM IST. For more news and updates on politics, world, sports, entertainment and lifestyle, log on to our website latestly.com).