Rocket Ka Attack and Race Ka Case are launched to strengthen channel's connect with the audience. 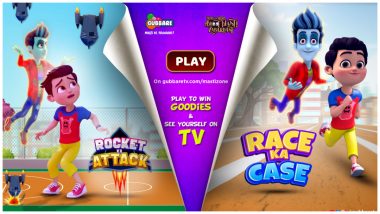 Gubbare, the kids’ channel from the house of IN10 Media Network, is set to capture children's imagination with interactive digital assets as affinity towards the world of gaming sees an upward trajectory. After the success of its original show, Roro Aur Hero Bhoot Mast Zabardast, launched in April this year, the channel is happy to announce the launch of two stimulating games and GIFs keeping in mind today’s digital consumption and usage amongst kids and teens. Akki Jaanbaaz Teaser: IN10 Media’s Gubbare Forays Into Original Content, Brings India’s First-Ever Magical Martial Arts Superhero.

With online games gaining popularity and their ‘always-on’ identity providing an opportunity for brands to drive value, the channel has developed two competitive games around its main characters – Roro and Hero. Race Ka Case is based on a simple kids-friendly game wherein the players have to make Roro and Hero cross numerous hurdles on a race track to win. Additionally, Rocket Ka Attack is an adventure game where Roro and Hero have to save themselves from rockets falling from the sky after a school project goes wrong!

To further build on the connection between the audience and the characters of the show, the channel has created numerous GIFs depicting various moods and situations. Today GIFs have become an integral part of online communication and will help to spread awareness about the show as they easily capture attention and have a strong capacity for virality. #ShikshaNaRuke Campaign: IN10 Media's Gubbare Partners With Smile Foundation.

The games and gifs can be enjoyed by kids and teens on WhatsApp, Instagram, Facebook, and Snapchat, while the games are available on the channel’s website. The channel has created a robust plan to promote them on social media and on television channels.

(The above story first appeared on LatestLY on Jul 07, 2022 05:20 PM IST. For more news and updates on politics, world, sports, entertainment and lifestyle, log on to our website latestly.com).