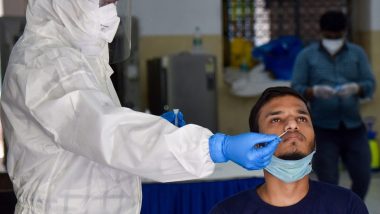 The fresh fatalities pushed the cumulative death toll to 11,940. According to the daily media bulletin issued by the state command control room, Chittoor district accounted for 12 deaths during the 24-hour period.

Seven people each succumbed to the virus in East Godavari and West Godavari, followed by six in Srikakulam, four each in Visakhapatnam and Anantapur, three each in YSR Kadapa, Krishna, Prakasam, and Vizianagaram, and two each in Guntur, Kurnool, and Nellore districts.

During the last 24 hours, East Godavari reported a maximum number of cases at 1,199. According to the bulletin, 968 new cases were traced in Chittoor, 765 in West Godavari, 530 in Anantapur, and 491 in Visakhapatnam.

(The above story first appeared on LatestLY on Jun 13, 2021 07:34 PM IST. For more news and updates on politics, world, sports, entertainment and lifestyle, log on to our website latestly.com).