India started its vaccination drive against COVID-19 almost six months back and consistently, a lot more men have been vaccinated as compared to women. 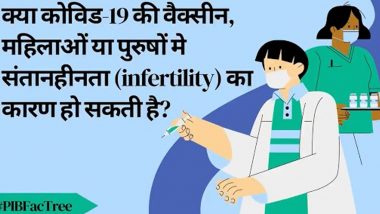 Pulwama, June 22: India started its vaccination drive against COVID-19 almost six months back and consistently, a lot more men have been vaccinated as compared to women.

In fact, government vaccination data has revealed that nearly 17 per cent more men are partially or completely vaccinated than women. And this gender disparity is almost double in the region of Jammu and Kashmir. This is mainly because myths and suspicions about the safety of the vaccine abound in the region.  COVID-19 Vaccine Can Cause Infertility in Men and Women? PIB Debunks Fake News, Reveals Truth Behind Viral Message

Very few women in the villages in Kashmir are getting themselves vaccinated against COVID-19 as many believe it can cause problems in menstruation, pregnancy and fertility.

Shameema, a 35-year-old woman, who lives in Balpora village in south Kashmir's Shopian district has been consistently hearing negative comments regarding the COVID-19 vaccine, especially from other married women. "They say if women take a dose of the vaccine, it will create problems in pregnancy. Women won't conceive then," she said, sounding concerned.

Such comments have prevented her from taking the jab so far. Talk about the multiple benefits of the vaccine, and she still isn't sure. "But who can guarantee our safety?" she questioned.

According to the data available on the COVID-19 Vaccine Intelligence Network (Co-WIN) portal, which tracks the beneficiaries on a real-time basis, the highest gendered difference among vaccinated individuals is from Srinagar. The data available shows that four out of ten districts have fewer women getting vaccinated as compared to men.

The fact there is limited information/data available about certain aspects of the vaccine's effect on menstrual health is also problematic. The US-based Centers for Disease Control and Prevention (CDC) recently put out a statement regarding pregnant women in which they said that pregnant women are at a higher risk of COVID-19 infection and one way to avoid serious implications of COVID-19 is to take the vaccine. The CDC also states that ‘Based on how these vaccines work in the body, experts believe they are unlikely to pose a risk for people who are pregnant. However, there is currently limited data on the safety of COVID-19 vaccines in pregnant people.'

Experts believe that rumours have played a crucial role in the behaviour of women and men in Kashmir towards vaccination. There are concerns of menstrual problems, infertility and high risk in pregnancy post-vaccination.

In the villages of Pulwama, about 21 km from Shopian, vaccination drives have been going on for nearly two months now. People are being vaccinated in many villages like Palpora, Chatripora and Trichal.

Najma Parvaiz, a 25-year-old field worker from Trichal village, who is part of the drive, has been going door to door to motivate people to take the vaccines. But this has not been an easy task as she has faced a lot of opposition from women, who believe vaccinations can cause them harm. One way in which she has encouraged others to get vaccinated is by telling them that she is herself vaccinated. "This encourages a few," she said.

But local myths are not the only reason for vaccine hesitancy here. A few weeks ago, a message was widely circulated on social media regarding French Nobel laureate, Luc Montagnier, who claimed that everyone who has taken the vaccines will die in two years.

The message created chaos among people and even reached the villages where Parvaiz was working. It caused massive vaccine hesitancy, especially among women.

Gurmukh Singh, the zonal medical officer in Tahab, Pulwama said that he hasn't seen such massive hesitancy before. "Families are scared of taking the vaccine. Motivating people has become an impossible task for us now," he said. Before the message about the French Nobel laureate was circulated, he said, "people would come forward and we were doing our work smoothly." But the message has worsened things a lot.

Shahnawaz Kaloo, a Kashmir-based interventional radiologist revealed that he gets messages from unmarried, pregnant, and breastfeeding women across Kashmir and outside Kashmir, who have apprehensions about taking the vaccines.

To counter vaccine hesitancy, Singh arranged for door to door vaccination so that more villagers can get vaccinated. The group would typically consist of paramedics, Asha workers, anganwadi (rural child care centre) workers, and a surveillance team. "Women above 18 are more hesitant. They first ask our paramedics whether it is safe for them to get vaccinated and would it affect their fertility later," he said.

But the level of vaccine hesitancy abound became clear as more often than not they would be subjected to aggressive behaviour like shouting, arguing, doors being shut in their faces and in some instances, even stone-throwing. People were often irked that the vaccination team sometimes arrived with recording devices which they considered a breach of their privacy. A health worker who wished to be anonymous said that they had to show videos and pictures as proof that they conducted vaccination drives in the area that they were assigned to.

One of the main reasons that women in Kashmir are avoiding vaccination is the doubt that it may cause infertility and irregular periods.

But Shahnawaz Kaloo said that the majority of women he came across have not seen any changes in their menstrual cycle. "While there are anecdotal episodes from women where they say that their cycle has been affected with vaccination, it is nothing to bother about. Cycles have a relation with stress and the overall well-being of a person. The apprehension of taking a vaccine and overthinking about how it is going to affect them could actually be the reason for irregular periods," he explained.

He said that after one takes a vaccine, an irregular cycle can occur for approximately two subsequent cycles, but then it will be fine.

According to him, misinformation about vaccination is rampant, which is creating confusion among women. And concerns about fertility are taken very seriously by the women. "But vaccination has nothing to do with fertility," he clarified.

He added that there should be proper channels where experts should be taken into consideration while giving out the information bulletin and experts can take questions from reporters and answer them which could send a better message outside. Perhaps, this could quell the hesitancy and lead to an increase in the number of women ready to take the jab.

(The above story first appeared on LatestLY on Jun 22, 2021 12:01 PM IST. For more news and updates on politics, world, sports, entertainment and lifestyle, log on to our website latestly.com).