A group of 26 employees, including five women, have been arrested here for duping over 1,250 US citizens through a fake call centre by impersonating as Amazon customer service providers, police said on Tuesday. 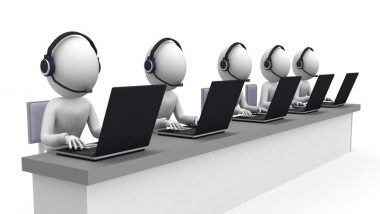 New Delhi, July 13: A group of 26 employees, including five women, have been arrested here for duping over 1,250 US citizens through a fake call centre by impersonating as Amazon customer service providers, police said on Tuesday.

On an average, the accused used to cheat over six US citizens per day. Thus, approximately over 1,250 US citizens have been cheated so far, the Delhi Police said.  Sputnik V Will Be Administered at Govt Vaccination Centre in Gurugram From Today

The call centre had been running for the last seven months and as per an estimate, police said, total cheating so far has been approximately more than Rs 4 crore ($5,25,000 USD).

The people at the call centre were pretending to be employed by Amazon and used illegal techniques like VOIP calling, thereby bypassing the legal international long-distance gateways.

The accused were extorting Amazon customers based in the US by claiming their amazon ID had been hacked.

The call centre was being run in outer Delhi's Sultanpur area. The employees were caught red-handed while trying to dupe people on calls.

Police carried out searches based on a tip-off, and surveillance was mounted around the premises.

A team led by Inspector Atul Tyagi raided the premises and found an office set-up in place.

On being asked about any license and authority to run the call centre, no documents could be produced, the police said.

"Mobile phones were recovered from the possession of the accused persons, which contained various US mobile numbers in a WhatsApp group."

When the customer would call back to know more about it, the accused would show them fake repair of their amazon ID through AnyDesk app.

The target would be made to pay up in the form of Target gift cards, which the accused would redeem.

"Further investigation is being carried out to unearth the whole gang of cheaters," police said.

(The above story first appeared on LatestLY on Jul 13, 2021 02:38 PM IST. For more news and updates on politics, world, sports, entertainment and lifestyle, log on to our website latestly.com).