The minimum temperature was recorded at 25.6 degrees Celsius, six notches above the season's average. 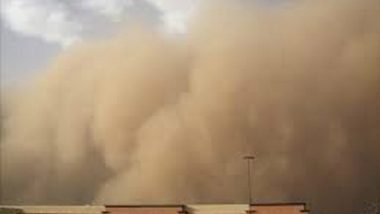 "Temperatures dipped by around 6-7 degrees Celsius after the thunderstorm," a weather official said. Weathermen blamed intense temperatures across the north Indian plains and an induced cyclonic circulation over north-east Rajasthan, south-west Uttar Pradesh, south Haryana and the Delhi NCR region for the creation of thunderstorm.

This was aided by easterlies from the Bay of Bengal that brought moisture, leading to an ideal condition for formation of dust storms and thunderstorms across several parts of north India, said Kuldeep Srivastava, Head of the Regional Weather Forecasting Centre of the India Meteorological Department said. Met Department Issues Thunderstorm, Dust Storm Alert in 26 Uttar Pradesh Districts.

Vice president (Meteorology And Climate Change) Skymet Mahesh Palawat said this is a normal phenomena which occurs during pre-monsoon days.

Whenever there is excessive heating and induced cyclonic circulation, there is an occurrence of thunderstorms, he said. The MeT Department has predicted partly cloudy sky for Monday with the possibility of very light rains, dust storm and thunderstorm. However, the intensity is likely to be less severe than Sunday.