A manager of a noted IT company, his friend and four women sustained injuries after they were allegedly beaten up by 8-10 bouncers and two managers at Casa Danza club in Udyog Vihar phase-2 of Gurugram on the intervening night of Sunday and Monday. 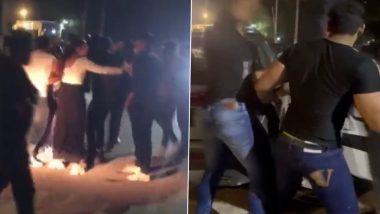 Gurugram, Aug 10: A manager of a noted IT company, his friend and four women sustained injuries after they were allegedly beaten up by 8-10 bouncers and two managers at Casa Danza club in Udyog Vihar phase-2 of Gurugram on the intervening night of Sunday and Monday.

According to the complainant, they were attacked with sticks and beaten brutally when one of his female friends allegedly tried to object to a bouncer who had touched her inappropriately and molested her. Pure Horror! Group of Women Mercilessly Beat Up a Female Pizza Chain Employee in Indore for Allegedly Staring; Watch Viral Video

The video of the incident widely surfaced on several social media platforms in which several bouncers can be seen thrashing and beating the victims on the road.

Gurugram, Haryana | A man, who went with his friends to Club Casa Danza in Udyog Vihar on the intervening night of Aug 7-8 was beaten by several bodyguards after one of them allegedly molested a female friend in their group.

The complainant Mayank Chaudhary, a resident of Sector-28 of Gurugram, stated in his police complaint that he along with his three female friends had visited Casa Danza club around 2 a.m. on August 7-8 at Udyog Vihar Phase-2.

"There I met my other friend Pushpak and his sister outside the club. During entry one of the bouncers touched my female friend inappropriately and when she objected, few other bouncers came to the spot and called their managers Lokesh and Santosh. My friend then complained to the duo manager about molestation. The managers then ordered the bouncers to beat us and get all of us out from the club," Mayank told the police.

"Thereafter, around 8-10 bouncers in black clothes and the duo managers joined together and beat me and my friends with sticks and slapped us multiple times. They pushed us to the ground in front of the club and on the road. They even snatched Pushpak's I-watch and Rs 10,000-12,000 from my pocket," the complainant alleged.

"Due to traffic jam, they left us on the road and the duo managers threatened us with dire consequences and returned to the club," the complainant told the police.

Mayank has filed a complaint in this regard and narrated the entire incident to the cops.

Speaking to IANS, Anil Kumar, station house officer (SHO) of Udyog Vihar police station said, "We have registered a case in this regard. We are also verifying the facts about the incident. The accused will be arrested soon."

A representative of the club, however, refuted all the allegations levelled by the youth.

(The above story first appeared on LatestLY on Aug 10, 2022 08:23 PM IST. For more news and updates on politics, world, sports, entertainment and lifestyle, log on to our website latestly.com).