Bagheera Teaser: Prabhudeva Turns Into a ‘Psycho Raja’ Who Is on a Mission to Kill Beautiful Girls (Watch Video)

Prabhudeva looks amazing as the 'Psycho Raja' and will leave you impressed with his acting already. We get to see a few glimpses of the leading ladies who will be romancing Prabhudeva on the screen as well. 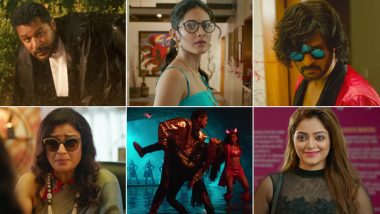 Expect the unexpected from Prabhudeva when it comes to acting. The actor who is currently busy shooting for his Bollywood project with Salman Khan is finally going to be seen on the big screen. The actor has collaborated with director Adhik Ravichandran for his film Bagheera where he will be seen essaying the role of a mad man. The makers of the film already piqued the audience's excitement by releasing the posters yesterday and now are all set to treat them with the thrilling teaser of the film. Bagheera: Amyra Dastur Flies Off to Chennai to Begin Shoot of Her Upcoming Film with Prabhudeva.

The teaser featuring Prabhudeva in various different avatars was unveiled today. The teaser begins with a scene of a mental asylum where Prabhudeva's character Bagheera Murlidharan is admitted. His first appearance establishes that he is one crazy man. In a few scenes, we even see him wearing a goggle with three lenses. In the following few minutes, we see him in different getups, killing women. There are some really disturbing scenes in the teaser that will make you a little comfortable as well.

Prabhudeva looks amazing as the 'Psycho Raja' and will leave you impressed with his acting already. We get to see a few glimpses of the leading ladies who will be romancing Prabhudeva on the screen as well. The dialogues are also power-packed and the background music is only adding drama to an already crazed glimpse of the film. The teaser sets the crazy tone for what is about to come and we think the audience will like it a lot.

Back on February 14, 2020, superstar Dhanush had released the first look of the movie on social media. In the first look, Prabhudeva was seen in a bald with a stream of blood on his face. He also wore a goggle with three lenses just like the teaser. The background was covered with eyeballs giving the poster a spooky look. Sharing the poster, Dhanush wrote, "Extremely Impressive First Look of #Bagheera starring my good friend @PDdancing master. Best wishes to the team." The posters garnered immense love from the audience. Salman Khan Is A Lot Like Rajinikanth, Feels Dabangg 3 Director Prabhudeva.

The psycho mystery thriller Bagheera will star Amrya Dastur, Gayathrie Shankar, Ramya Nambeesan, Janani Iyer, Sanchita Shetty, Sakshi Agarwal, Sonia Agarwal, Sai Kumar, Nassar and Pragathi in key roles. Directed and written by Adhik Ravichandran, the film is backed R.V.Bharathan and S.V.R Ravi Shankar under the banner of Bharathan Pictures. The film release date is yet to be announced by the makers.

(The above story first appeared on LatestLY on Feb 19, 2021 01:10 PM IST. For more news and updates on politics, world, sports, entertainment and lifestyle, log on to our website latestly.com).