Kim Seok Jin Birthday Special: Awake, Moon - Five Songs Of BTS' Jin That Have A Message For All

Today is Kim Seok Jin's or the world's BTS Jin's birthday. On this day, let's talk about his solo numbers which are richly profound and make you wonder how a young guy like Jin could have such amazing depth in his thoughts. 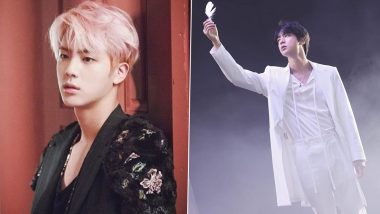 BTS' eldest member Kim Seok Jin or Jin celebrates his birthday. He perhaps experienced one of the most dreamiest ways of getting discovered. Billboard reveals that Jin was one day taking a bus and was randomly scouted by Big Hit Entertainment, the agency that manages BTS. He wanted to pursue acting and was even learning the ropes of it. But as they say, if you are fated somewhere, fate will make you be present at the right time and right place. What makes this discovery even more special is that Jin has equally dreamy voice which can transfix anyone. The ARMY will agree he can make you his by just humming a few tunes. While together with his band members he has created history, his solo songs have done equally well. BTS' 'Love Yourself: Answer' Becomes the First Korean Album to Surpass 4 Billion Streams on Spotify! ARMY Takes over Twitter.

What's amazing about Jin's solos is that they all have a message for his admirers, his fans and people in general. Let us tell you about five of them on his birthday. McDonald's BTS Meal: From McJordans To BTS Meal; Here's Everything You Need To Know About McDonald's History In Celebrity Collaborations.

A song from Wings album has Jin expressing his desire to fly but he doesn't have wings. The feeling of being trapped is so uniquely displayed by him.

We all suffer from insecurities, Jin's this rendition is for all those who don't love themselves. He wants them to value themselves first, as he says 'I am the one I should love in this world'. Bang on!

The unbearable pain of losing someone close is beautifully penned and sung by Jin here. In a blog post, he had mentioned how he wrote this song after losing his pet. The words become even more meaningful after you hear this.

An ode to his fans or the ARMYs where he is the moon while they are the earth and how they help each other grow together.

Released in the fag end of 2020, 'Abyss', as the word suggests, is all about the deep loneliness Jin felt because he was away from everyone.

Many feel BTS members are overhyped. But our question is how often have you seen boys having a profound understanding of life at such a young age? Not too often for sure!

(The above story first appeared on LatestLY on Dec 04, 2021 09:40 AM IST. For more news and updates on politics, world, sports, entertainment and lifestyle, log on to our website latestly.com).