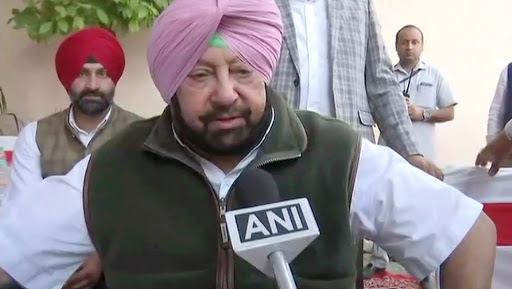 Dera Baba Nanak, November 26: Punjab Chief Minister Amarinder Singh on Monday used the foundation stone-laying event for Kartarpur Sahib corridor across Indo-Pak border for Sikh pilgrims to warn Pakistan to stop terror activities against India and said "we have a large army and we are prepared". Vice President M Venkaiah Naidu, who laid the foundation stone for the much-awaited corridor, access to which is seen as a goodwill gesture by Pakistan, called it "beginning of a new chapter" in bilateral ties and said it will act as a "unifier" to build bridges across old chasms.

However, Naidu also lamented that it was unfortunate that some people made terrorism their policy and India would not allow terrorism and killing of innocent on its soil. However, he didn't name Pakistan. While Punjab chief minister turned down Pakistan's invitation to participate in the inauguration there on Wednesday, his cabinet colleague Navjot Singh Sidhu, who described the Pakistan Prime Minister Imran Khan as an "angel" for accepting the long-pending demand of Sikh pilgrims, will be going. Kartarpur Corridor: Captain Amarinder Singh Refuses to Comment on Navjot Singh Sidhu's Views, Flays Pakistan Over Terror.

"There are tremendous possibilities in this corridor, only a political was required which has been shown by an angel (Imran Khan) across the border and as well our government here," Sidhu told reporters. Defending his decision of not going to Pakistan, the chief minister said, "Punjab has been suffering due to terrorism for 20 years and is paying even today... This is why I will not go to Pakistan till violence stops. My heart wants me to go there but I have commitment to ensure safety of my people." Singh, who himself is a retired army officer, lashed out at Pakistan army chief, but thanked its prime minister for the gesture.

"While I thank Prime Minister of Pakistan (for Kartarpur Corridor), I want to say something to his Chief of Army Staff (Gen Qamar Javed Bajwa). I have been in the army and he (Pakistan army chief) is very junior to me in the service. When we were in the army, the country's security was always foremost for us. But who teaches in the army that you kill our soldiers at the border?, Singh questioned. He further said Pakistan army uses sniper to kill Indian Jawans.

"Have you ever been told that you killed people in Pathankot, Dinanagar (referring to terror attacks at Pathankot air base in 2016 and Dinanagar in Gurdaspur in 2015)," Singh said. Incidently, today's event coincided with the 10th anniversary of Mumbai terror attack, carried out by terror groups in Pakistan, in which over 160 people were killed. He asserted that India wants peace and that's the message the country is giving through this corridor, but at the same time it also has huge army to tackle any threat.

"We believe in peace and we are giving a message of peace from here. But, their generals should understand that we have a large Army and we are prepared... And this should not happen as nobody wants war. We all want to carry out development in a peaceful manner," Singh said. He made these remarks while referring to recent grenade attack at the Nirankari hall in Amritsar, and attack on airforce station in Pathankot in Punjab in 2016. "If they try to foment trouble in Punjab then Bajwa (Pak army chief) should remember that we have Punjabi blood, we will not tolerate it,” Singh said.

Asserting that India wants good relations with its neighbours, Naidu said,"This is a corridor that opens new doors. It is a path that opens up new possibilities. It is a unifier, building bridges across old chasms. It promotes deeper understanding and a new resolve to connect the people of our two countries through love, empathy and invisible threads of common spiritual heritage." He further said that the two countries need to create history together which will make the entire world a more peaceful place for children.

At the event, the SAD and the Congress leaders appeared squabbling with each other for taking credit of building this corridor. Union Minister Nitin Gadkari who was present at the event announced that the corridor will be completed within four and half months. Others present included union minister Harsimrat Kaur Badal and Congress MP Sunil Jakhar, both of whom claimed credit for their respective parties for opening of the corridor. Badal and her cabinet colleague Hardeep Singh Puri will be travelling to Pakistan as the government representatives for the inauguration of the corridor.