A bench of Justice U.C. Srivastava (judicial member) and Vice Admiral Abhay Raghunath Karve (administrative member) passed the order on the application of the husband, but later substituted by the wife after his death. 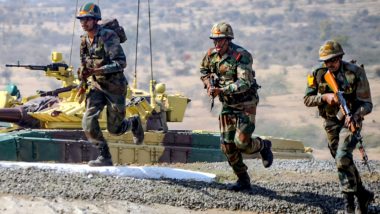 Lucknow, March 3: After a 12-year-long legal battle, a soldier's widow will finally get her dues. The regional bench of the Armed Forces Tribunal has directed the Chief of Army Staff and other respondents to provide family pension to Savita Singh, wife of a lance naik Shailendra Singh, who was invalidated from service in 2003 owing to disability.

A bench of Justice U.C. Srivastava (judicial member) and Vice Admiral Abhay Raghunath Karve (administrative member) passed the order on the application of the husband, but later substituted by the wife after his death.

Allowing the application, the bench cautioned the Army to give effect to the order within four months otherwise default would invite interest of 8 per cent per annum till actual payment. National Security Officials to Testify on January 6 Mistakes.

Further, it ordered to provide the pension from 2008, the year the husband had died.

It also said that arrears of the pension would be restricted to three years preceding the date of filing of the case before the tribunal in 2017.

According to reports, Shailendra Singh was enrolled in the Indian Army on January 1, 1996 and was invalidated out of service on March 17, 2003, after having rendered more than seven years in low medical category P-5 due to disability 'Recurrent Anaplastic Astrocytoma Left Temporo Parietal Region' (OPTD), a rare malignant brain tumor. Counting of Votes for MCD By-Poll in Rohini-C, Shalimar Bagh North, Trilokpuri, Kalyanpuri, Chauhan Bangar To Be Held Today.

The bench agreed to the plea of the wife that her husband was enrolled in the Army in medically and physically fit condition and there was no note in his service documents with regard to suffering from any disease prior to the enrolment and hence any disability suffered by her husband after joining the service should be considered as attributable to or aggravated by military service and she should be entitled for family pension.

(The above story first appeared on LatestLY on Mar 03, 2021 12:47 PM IST. For more news and updates on politics, world, sports, entertainment and lifestyle, log on to our website latestly.com).