Rewa District Collector in Madhya Pradesh has directed that government employees who are unavailable for duty in panchayat elections will be retired prematurely. A circular to this regard was issued by the Collector. 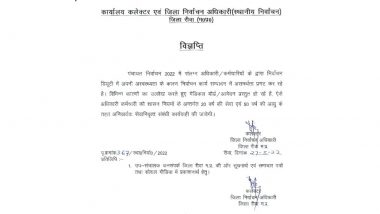 Bhopal, May 28: Rewa District Collector in Madhya Pradesh has directed that government employees who are unavailable for duty in panchayat elections will be retired prematurely. A circular to this regard was issued by the Collector.

The circular was issued after observing that a number of government officials and employees posted in Rewa have expressed their inability to be available for election duty after the Madhya Pradesh State Election Commission (MP-SEC) announced the dates for three-tier panchayat elections which will be held from June 25 to July 8. 7th Pay Commission Latest Update: Centre Likely To Hike Dearness Allowance to 38% for Government Employees

Employees have sought leave from election duty citing ill health and have submitted their medical reports. After noticing a bunch of such applications, Rewa District Collector Manoj Pushp issued a circular mentioning: "Officials and employees who submit application of their ill health to skip election duty will be compulsorily retired under the rules of the government, which state the conditions: 20 years of services and 50 years of age."

After the poll dates were announced on Friday, the Collector along with SP Navneet Bhasin held a meeting with officials to take stock of preparations in the district. The officials were seen visiting block offices for inspection.

The SEC also made it clear that voting in panchayat elections will be conducted through ballot papers and not EVM (Electronic Voting Machines). The electorate in three-tire panchayats will be allowed to cast their vote between 7 a.m. and 3 p.m.

The process of nomination will start from May 30 and the last date for withdrawal of nominations will be June 10 till 3 p.m. The SEC said that possession of voter ID cards will be necessary for voting.

(The above story first appeared on LatestLY on May 28, 2022 08:19 PM IST. For more news and updates on politics, world, sports, entertainment and lifestyle, log on to our website latestly.com).