The crash sound triggered a minor panic with people running helter-skelter, but there were no casualties in the incident, the cause of which is not clear. 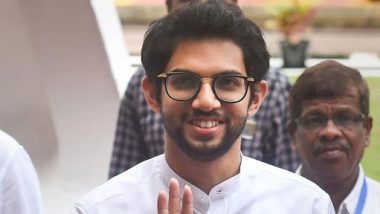 Mumbai, June 4: Maharashtra Tourism Minister Aaditya Thackeray had a narrow escape as a huge chandelier crashed along with a slab at the Sahyadri Guest House here on Friday evening, officials said. The incident occurred when Thackeray, along with top officials, was busy conducting a series of meetings at hall no 4 of the posh state guest house.

Shortly before 5 p.m., there was a deafening sound as a massive chandelier set on a slab collapsed outside his meeting hall, sending alarms among the security personnel. The crash sound triggered a minor panic with people running helter-skelter, but there were no casualties in the incident, the cause of which is not clear. ‘BMC Asked To Explore Possibility of Global Procurement of COVID-19 Vaccines’, Says Maharashtra Minister Aaditya Thackeray.

Soon afterwards, teams of the PWD Department started a survey of the entire guest house to check and audit for any potential future threats there, and at other major venues. An official said that in the pandemic lockdown, most ministers, including Chief Minister Uddhav Thackeray and others prefer to conduct their official meetings at Sahyadri Guest House or some other government locations as many Covid-19 cases have been detected in the Mantralaya during the past 15 months.

(The above story first appeared on LatestLY on Jun 04, 2021 09:24 PM IST. For more news and updates on politics, world, sports, entertainment and lifestyle, log on to our website latestly.com).