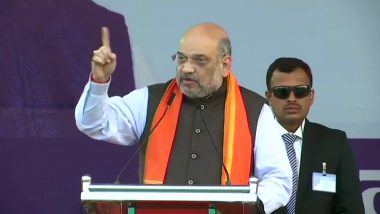 Sonowal appreciated the contributions of Shah in numerous aspects of the country and also hailed his ministerial colleague Sarma for translating the book in Assamese.Sarma, who holds the health, finance, education and PWD portfolios, said that Shah has profound knowledge of the civilisation and culture of the country, as well as Assam. 'Amit Shah Plans to Expand BJP Footprints in Nepal & Sri Lanka', Claims Tripura CM Biplab Deb; Watch Video.

BJP's national Vice President Baijayant Jay Panda, who is in-charge of the party's Assam affairs, said: "After interacting with Amit Shah on numerous occasions, I have learnt that he is one of the most well-read persons that I have met in politics." "It is equally impressive that despite his busy schedule, Sarma has devoted his time to authorship and translation of this mind-boggling work," Panda added.

Those present on the occasion included Anirban Ganguly and Shiwanand Dwivedi -the authors of the original book "Amit Shah and the March of BJP" - BJP's national General Secretary Dilip Saikia and state President Ranjeet Kumar Dass, among others.

(The above story first appeared on LatestLY on Mar 08, 2021 11:04 PM IST. For more news and updates on politics, world, sports, entertainment and lifestyle, log on to our website latestly.com).