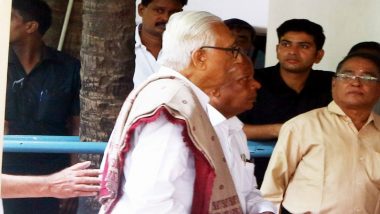 In a statement issued here Stalin said Anbazhagan was a close friend of late party President M. Karunanidhi and served as the party's General Secretary for 43 years.

Anbazhagan was appointed to the party General Secretary post in 1977. He was admitted to Apollo Hospitals due to age related ailments on Feb 24 and his condition turned critical later.

He was a Member of Lok Sabha 1967-1971 and was also a member of Tamil Nadu Legislative Council which was abolished later.

In 1984, Anbazhagan had resigned as he member of Tamil Nadu Assembly in support of Sri Lankan Tamils.

Condoling Anbazhagan's death Stalin cancelled all party activities and the party flag will fly at half mast during the mourning period as a mark of respect for the departed leader.

Anbazhagan's body was taken to his residence from Apollo Hospital for public homage. For the past one year Anbazhagan was taking rest at his home due to his old age and was not attending public functions.

Affectionately called as 'Perasiriyar' or Professor, Anbazhagan was born as Ramaiah in Tiruvarur District (then Thanjavur District) on 19.12.1922 and later changed his name. Anbazhagan was a post-graduate in Tamil literature from Annamalai University.

(The above story first appeared on LatestLY on Mar 07, 2020 08:46 AM IST. For more news and updates on politics, world, sports, entertainment and lifestyle, log on to our website latestly.com).