Actor politician Pawan Kalyan on Wednesday alleged that Andhra Pradesh has become a narcotics hub of the nation with 'ganja' (marijuana) being supplied to various parts of the country from the State. 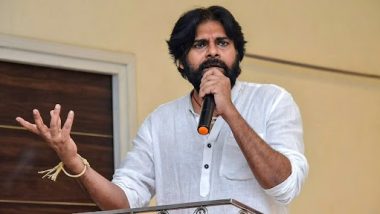 "Entire nation is getting affected due to willful inaction of leaders who are in-charge of the present government," wrote Pawan Kalyan. "During my 'Porata Yatra' in 2018, which was meant to understand the socio-economic issues of people of the state, in the tribal areas of Andhra-Orissa border I had received numerous complaints about health, unemployment, illegal mining and about 'ganja trade and its mafia'," the actor tweeted. What Is Narcotics Control Bureau? Here's All You Need To Know About NCB, The Agency Probing Drugs On Cruise Case Involving Aryan Khan.

During my ’ Porata Yatra’in 2018,which was meant to understand the socio,economic issues of people of the state. In the tribal areas of ‘ Andhra Orissa Border’ I had received numerous complaints about health, unemployment, illegal mining and also about ‘ganja trade & its mafia’. pic.twitter.com/OU74YN0LOk

The Jana Sena leader posted alleged video clips of police officials of different States and cities to support his claims. "Andhra Pradesh -- 'Narcotics hub of the nation' supplies ganja to Pune, Mumbai and Maharashtra, too. The Maharashtra Police have seized the ganja shipment, Pawan wrote with an alleged clip of a TV news channel's report about seizure of 312 kg of the contraband.

"Hyderabad City-Police Commissioner' Sri Anjani Kumar, (IPS) giving out details about how narcotics are being transported from AP to the rest of the country," tweeted Jana Sena leader with a clip from the police official's press conference.

He also posted the video clip of Ranganath, Superintendent of Police of Nalgonda district of Telangana. The official revealed that the Andhra Orissa Border area is the source of ganja and from there it is supplied to various parts of the country.

Another video clip is of a Madhya Pradesh police official speaking about seizure of ganja worth Rs 1 crore which was brought from Chittoor in Andhra Pradesh. A TV report posted by Pawan is about the Rajasthan Police seizing 210 kg of ganja from Visakhapatnam, Andhra Pradesh. Another video is of Delhi Police revealing the seizure of ganja. Subsequent interrogation revealed, it came from Visakhapatnam.

(The above story first appeared on LatestLY on Oct 27, 2021 02:52 PM IST. For more news and updates on politics, world, sports, entertainment and lifestyle, log on to our website latestly.com).