According to a tweet by ANI, the incident took place between Surareddipalem and Tangutur stations in Prakasam district late at night. No casualties have been reported in the incident. 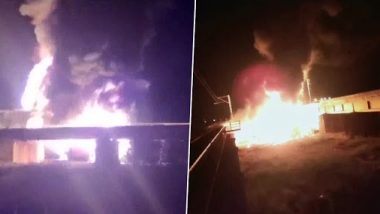 Hyderabad, June 25: A major incident was averted on Thursday after three coaches of a goods train carrying highly inflammable material caught fire in Andhra Pradesh. According to a tweet by ANI, the incident took place between Surareddipalem and Tangutur stations in Prakasam district during the wee hours. No casualties have been reported in the incident.  Restoration work is underway at the site while the movement of trains has been affected on the route due to the derailment.

The ANI tweet further added saying that the derailed coaches were carrying oil tankers. As soon as the incident was reported, Railway Official said that four trains were diverted in the route in the wake of the incident. According to a report by TOI,  a senior railway official said that at 00. 15hrs on Thursday, the train's three coaches caught fire. At around 00.20 hrs, the coaches derailed.  Telangana Express Catches Fire Near Haryana, Blaze Reported in Brake Binding Area of the Train.

Andhra Pradesh: Three coaches of a goods train were derailed and caught fire between Surareddipalem and Tangutur stations, late last night. The derailed coaches were carrying oil tankers. Railway Official said, "four trains were diverted in the route, due to the incident." pic.twitter.com/2wjASXMcZB

According to reports, the train, with diesel tankers was en route to Chennai from Vijayawada. Several other media reports claim that more than three wagons of the goods train carrying inflammables had been derailed between Surareddipalem and Tangutur stations. The reports also informed that the fire engulfed its rake. The South Central Railway Division has instructed officials for speedy restoration of damaged track.

(The above story first appeared on LatestLY on Jun 25, 2020 11:41 AM IST. For more news and updates on politics, world, sports, entertainment and lifestyle, log on to our website latestly.com).