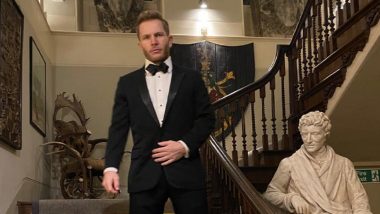 Andrej Rusakov is a seasoned serial entrepreneur, investor, and the founder of RemedyLogic, an AI-driven healthcare technology company. Rusakov is a sought after thought leader at the forefront of technology and innovation and has been described by Busines Times as ‘Lithuania’s Top 5 Entrepreneurs’ and recognized internationally for innovations in big data and machine learning and he has been featured in publications such as Clariden Global, Harvard Graduate Council publications, MIT Sloan Investments, FirstMark's Data Driven, and Battle of the Quants.

Mr. Rusakov grew up in a small town populated by a highly educated and intellectual community of nuclear engineers, scientists and mathematicians who encouraged his passion for winning national math and physics competitions. At age 15, he was invited to the prestigious Kolmogorov's Boarding School in the former USSR to pursue his secondary education. Rusakov then completed his MSc in Mathematics (Statistics and Theory of Probabilities) from Division of Mechanics and Mathematics at Moscow State University learning varied subjects ranging from differential geometry to quantum mechanics and statistical physics, graduating with the “Red Diploma” top 1% of his class. Results and findings from his programme have been published in a variety of distinguished academia and journals such.

In early 2000, Rusakov leveraged his math background studying the inefficiencies of the real estate market in Moscow and with a team, developed a rigorous algorithmic method to identify real estate investment opportunities. This venture paid off and made him a multi-millionaire at the age of 21, marking his first significant achievement as an investor.

Rusakov learned from his early success that more opportunities existed and moved to London to engage with the business community and better understand the international markets. He educated himself on GAAP and IFRS accounting, economics, and finance and got into investment banking after being recruited by Morgan Stanley (Mergers & Acquisitions). He was then headhunted to join the technology investment team at Apax Partners, the largest European private equity firm with $35 billion under management. After Apax, Rusakov completed his MBA at Harvard Business School and raised $400 million to invest in local Russian companies to help with global expansion. His recent venture is RemedyLogic - a healthcare technology company providing AI-powered medical diagnosis and remedy counsel, to save patients from medical errors, which is the third-leading cause of death in the U.S.

As an entrepreneurial executive himself, who had a transformational experience at Harvard and values the impact of education, Rusakov has made it his mission to give back and support students and young entrepreneurs through his Rusakov Fellowship Foundation which he setup in 2017. He is seeking to unlock equal opportunity of access to education by sponsoring students to Harvard and through this program, support the dreams of the world’s future business leaders. He is also a supporter of several charities and The Opportunity Network, a foundation enabling access for students from historically underrepresented communities.