On Wednesday morning, thousands of Mumbaikars formed a human chain in protest against the Citizenship Amendment Act, National Population Register and National Register of Citizens. The protesters, who also included women and who wore badges with the message “Say no to CAA", held aloft banners against the controversial law. 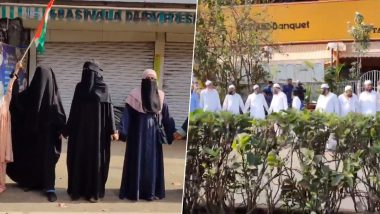 Mumbai, January 29: Thousands of Mumbaikars formed a human chain in protest against the Citizenship Amendment Act (CAA), National Population Register (NPR) and National Register of Citizens (NRC) on Wednesday. The protesters, who wore badges with the message “Say no to CAA", held aloft banners against the controversial law. The mega human chain in which women also took part was formed from Oshiwara near Jogeshwari and extended till Amboli in Mumbai. Mumbai Artists Take Up Brush & Paint to Protest Against CAA, NRC.

Several pictures and videos of the protest are going viral on social media. The members of Bahujan Kranti Morcha (BKM) also called for a Bharat Bandh today in protest against CAA and proposed NRC. The BKM workers blocked the railway tracks at Kanjurmarg station. They also stopped a few trains.

Human Chain Formed in Mumbai in Protest Against CAA and NRC:

Massive protest against #CAA and #NRC this morning in Jogeshwari, Mumbai. Most shops are shut. Protesters have formed a human chain along SV Road, and they're out with placards, tricolour flying high 🇮🇳#IndiaAgainstCAA #IndiaAgainstNRC #BharatBandh pic.twitter.com/EEzYh83vgS

Several organisations under the banner of "Jan Ekta Jan Adhikar Andolan" will be forming a human chain in Delhi on Martyrs' Day on January 30. The demonstrators will also observe a day-long fast and light candles in protest against CAA and NRC.

(The above story first appeared on LatestLY on Jan 29, 2020 12:43 PM IST. For more news and updates on politics, world, sports, entertainment and lifestyle, log on to our website latestly.com).