The foundation stone of this institute was laid by the Chief Minister on March 29, 2018. He had also announced the opening of this institute in Karnal on December 14, 2016. This centre has been set up in collaboration with Honda Motor Scooter India Limited on 9.25 acres of land at a cost of about Rs. 34 crore. 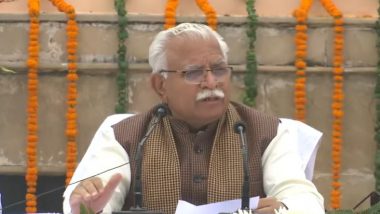 Chandigarh, August 6: Chief Minister, Sh. Manohar Lal has given a big bonanza to the state by inaugurating the Institute of Driving Training and Research in Karnal. While speaking on the occasion, the Chief Minister said that the citizens of Karnal and adjoining districts will be greatly benefited by the establishment of this centre.

Every day 300 to 350 youth will be given training to drive light and heavy motor vehicles. He said that with good training in driving, we will get good drivers and road accidents will substantially lower down. He said that due to heavy traffic of commuters on roads the chances of accidents have also increased.

In such a situation, the right knowledge of road safety and traffic rules is the need of the hour. Expressing gratitude to the vehicle manufacturer Honda for the cooperation in the training centre, the Chief Minister said that this Driving Training Institute being started with the help of Honda Company will surely contribute significantly in this direction. Haryana CM Manohar Lal Khattar Says Use of Latest Technology and Crop Diversification.

The foundation stone of this institute was laid by the Chief Minister on March 29, 2018. He had also announced the opening of this institute in Karnal on December 14, 2016. This centre has been set up in collaboration with Honda Motor Scooter India Limited on 9.25 acres of land at a cost of about Rs. 34 crore.

The centre will also have an automated driving test track to provide practical training on the test track and issue driving licenses. This institute will be fully automated and there will be no human intervention in its working. A hostel has also been set up in the centre for students who live far from the centre.

The Chief Minister said that many road accidents occur due to lack of driving skills and breaching of safety by drivers. So the state government has planned to impart driving training to the youth who are aspiring to become drivers.

Automated Driver Training Institutes and Regional Driver Training Centres will be set up across the state to make adequate arrangements for training of drivers across the state. Under this, three Institute of Driving Training and Research have been set up with modern facilities and infrastructure at Kaithal, Bahadurgarh and Rohtak. Hi-tech equipment manufacturers such as Ashok Leyland and Maruti Suzuki India Limited are partners in all three projects.

Now there are 4 institutes including this driving institute of Karnal. Apart from these, 8 other institutions are going to open in the state which includes institute at Kaluwas in district Bhiwani, Chhapera in Nuh, Jaisinghpur Khera in Rewari, Pegan in Jind, Murthal in Sonepat, Aurangabad in Yamunanagar, Bahin in Palwal and Kheri Gujran in district Faridabad. Regional Driver Training Centre will also be set up in District Gurugram as well. Haryana Chief Minister Manohar Lal Khattar Announces Rs 20,000 Monthly Scholarship for CBSE Class 10 Topper Anjali Yadav.

After obtaining the training certificate to drive a motor vehicle in these institutions, the applicant will not be required to present himself/herself before the concerned Licensing Authority. Today there is a great need of trained drivers across the country and abroad. With the establishment of these centres, employment opportunities will be available to a large number of unemployed youth in the state and abroad, the Chief Minister said.

The Chief Minister said that about 5 lakh road accidents take place in India every year. In these accidents, about 1.5 lakh people have to lose their lives due to lack of driving skills. Haryana is at the 13th place in the road accidents occurring in the country and the state government is making sincere efforts to curb road accidents.

The Transport Department of Haryana has been declared as the Lead Agency by the State Government for all road safety works. He further said that the government aims to reduce these accidents by 50 percent in the state by surveying the causes of deaths in road accidents and rectifying their causes, for which we all have to make sincere efforts. Haryana and Israel to Cooperate in Water Conservation, Says CM Manohar Lal.

The Chief Minister further said that not only the government but the public, non-government organizations and industries should also have to come forward to establish a safe road network.