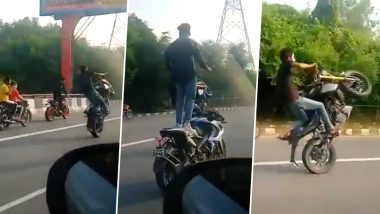 New Delhi, September 20: A group of bikers was seen performing daring stunts on the Delhi roads. The video shot by a passerby showed half a dozen bikes and scooties with young men in their early twenties doing dangerous stunts on the roads risking their lives together with the lives of others. The video is said to be recorded on Sunday morning near Vikas Marg in East Delhi. Kandivali Freak Accident Caught on Video: Pillion Bike Rider Crushed to Death in Mumbai Suburb After Metro Rail Barricade Falls.

The video, which went viral, was brought immediately into the notice of the Delhi Traffic Police. "Area Traffic Police have already been informed in this regard," said a senior police officer.

In a 20-second video, the bikers were seen standing on the bikes, some seen pulling the front wheel off in the air and some were seen doing tripling on the bikes flouting traffic regulations.

Though most of the bikers were seen without helmets, interestingly many were seen wearing masks as a precaution against the coronavirus.

Stunt bikers usually set off on roads with the high end bikes either late at night or early in the morning when the roads have less traffic.

Delhi police have been vigilant against stunt biking and on various occasions have apprehended many stunt bikers on roads. Many advisories have also been issued in this regard to the general public.

(The above story first appeared on LatestLY on Sep 20, 2020 04:04 PM IST. For more news and updates on politics, world, sports, entertainment and lifestyle, log on to our website latestly.com).