The protest turned violent after students got to streets and set tyres and public buses on fire. Students across India took took to streets demanding a probe into the use of teargas inside university’s library. 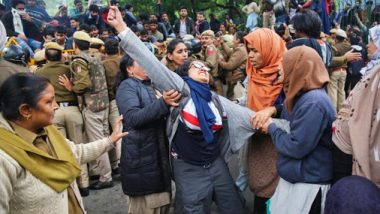 New Delhi, December 17: Two days after the police crackdown at Delhi’s Jamia Miiia Islamia Unuversity, the Home Ministry said that an empty cartridge was found from violence-hit area in Jamia, but police didn't fire any bullet on protesters. This comes hours after sources of the Delhi Police claimed that two persons admitted in the Safdarjung Hospital had suffered bullet injuries. Earlier in the day, sources stated that two men were admitted on their own in the Safdarjung Hospital. "The type of injury to these people have suffered is yet to be known. We have not fired anything, but we have recovered empty shell at a residential area", sources said.

On Sunday, police entered the campus and allegedly used force, following violence and arson during protests against the Citizenship Amendment Act (CAA). The protest turned violent after students got to streets and set tyres and public buses on fire. Students across India took took to streets demanding a probe into the use of teargas inside university’s library.

The authorities and students of the Jamia Millia Islamia claimed they had nothing to do with the violence and arson during the protest and alleged that "certain elements" had joined in and disrupted the "peaceful" march. On Monday, Jamia Millia Islamia Vice-Chancellor Najma Akhtar expressed anguish and said the university will not tolerate police presence on campus and demanded a high-level inquiry into the crackdown on university students. Akhtar claimed that Police entered the campus without permission and  scared our students with police brutality.

(The above story first appeared on LatestLY on Dec 17, 2019 04:58 PM IST. For more news and updates on politics, world, sports, entertainment and lifestyle, log on to our website latestly.com).