Maharashtra minister and NCP leader Nawab Malik on Wednesday claimed the Cordelia cruise drugs party organisers had taken permission directly from the "directorate of shipping" at the Centre and not the state police or the state home department. 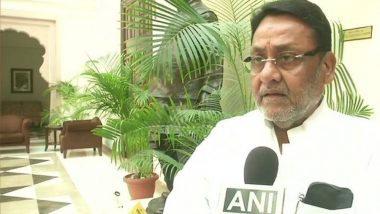 Mumbai, Oct 27: Maharashtra minister and NCP leader Nawab Malik on Wednesday claimed the Cordelia cruise drugs party organisers had taken permission directly from the "directorate of shipping" at the Centre and not the state police or the state home department.

Speaking to reporters here, Malik also claimed that a member of an international drugs mafia was present on the same cruise, and asked how come he was moving scot-free, while some others were arrested, following a raid on the ship earlier this month. Mumbai Cruise Drugs Case: ‘My Family Including My Sister and Deceased Mother Are Being Targeted’, Says Sameer Wankhede.

Malik also said if the Narcotics Control Bureau Mumbai zonal director Sameer Wankhede's birth certificate, which the minister had posted online to claim the official forged documents to secure job, turns out false, then he will resign from his ministerial post and retire as a politician.

"I wonder why BJP leaders are getting uncomfortable when I am trying to expose Sameer Wankhede," he said.

The Narcotics Control Bureau (NCB) raided the cruise ship off the Mumbai coast on October 2 during which drugs were allegedly seized. Later, Aryan Khan, actor Shah Rukh Khan's son, and some others were arrested.

Malik has repeatedly termed the cruise drug bust case as "fake" and levelled a string of allegations against Wankhede, who led the raid.

On Wednesday, the minister said, “The Cordelia cruise drugs party organisers—Fashion TV— had not taken any permission from the Maharashtra Police or the state home department. They obtained the permission directly from the directorate of shipping, which comes under the Union Ministry for Ports, Shipping and Waterways.”

"I believe that a top committee of NCB officials from Delhi has arrived here. They should check the call detail records of personal phones of NCB zonal director Sameer Wankhede, (witnesses) K P Gosavi, Prabhakar Sail and Wankhede's driver Mane. You will need no recording of statements. The phone calls will be self-explanatory," he said.

The minister also claimed that a member of an international drugs mafia was present on the same cruise.

"There are some of videos of the party in which the person, sporting a beard, can been seen. I am told he was in the Tihar Jail (Delhi) and in a Rajasthan jail in the past. The NCB's Delhi team should check the CCTV cameras of the cruise.

How come a few people were arrested and the international level drugs mafia (member) is moving scot-free?” the NCP spokesperson asked.

Malik also said that if Wankhede's birth certificate, which he had posted on social media, turns out to be false, then "I will resign from my post and retire as a politician".

"If my claims are true, then Sameer Wankhede should at least apologise to me and my family. He will lose his job for sure," the minister said.

Malik claimed he was giving "clues" to top officials of the NCB who needed to carry out a probe into this matter.

"They should find out who are the friends of Sameer Wankhede and how he is connected with drug dealer Sam D'Souza. As per my information, Kiran Gosavi had moved some Rs 50 lakh cash to his flat and he later gave another bag to Sam D'Souza. These are suspicious movements,” he claimed.

Malik also said he was told that lot of drugs supplied to Goa were controlled by the "man with the beard" who was present at the Cordelia cruise party.

"Despite several efforts from the NCB to take action, Sameer Wankhede always opposed initiating any action against these people. The NCB officials should also probe this angle," he said.

To a query by reporters, Malik said he had posted on his Twitter handle a picture of Sameer Wankhede and the latter's first wife Shabana Qureshi.

"Their marriage took place on December 7, 2006 in the Lokhandwala complex. The marriage registration clearly says that his father's name is Dawood and Sameer Wankhede is a Muslim. One of the witnesses of the marriage was Aziz Khan, husband of Yasmeen Dawood Wankhede- the elder sister of Sameer Wankhede," he said.

The minister also claimed he did not use his "political privilege" to find out information about Sameer Wankhede.

"I have not asked any police officials to help me in it. I wonder why BJP leaders are getting uncomfortable when I am trying to expose Sameer Wankhede," the minister said.

Malik had earlier levelled a number of allegations against Sameer Wankhede and also accused him of illegal phone tapping and forging his documents to secure job.

Wankhede, who visited the NCB office in Delhi on Tuesday, has denied the allegations.