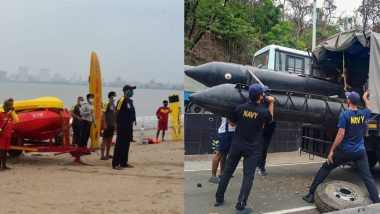 Mumbai, June 3: With the Cyclone Nisarga approaching fast in Maharashtra's capital, the Chief Minister's Office on Wednesday released a list of 'Dos' and Dont's to stay safe'. The administration has asked people to be cautious and not believe in rumours. As per the India Meteorological Department (IMD)'s latest update, the "severe cyclonic storm" of Nisarga will make landfall in Maharashtra between 1 to 4 pm.

Informing about the Do's, the CMO asked the people to move their belongings inside or tighten it outside. It also asked to keep documents and jewellery in a plastic bag. The CMO even stated to charge batteries and reserve power systems in advance. It also asked them to disconnect the power supply of all non-emergency equipment. Cyclone Nisarga Live Path Tracker Map: Check Movement, Forecast and Current Position of Severe Cyclonic Storm Which Will Make Landfall Near Alibaug Today.

Among other things, the administration asked the people to stay away from large roof spaces and shift to pre-determined locations. The government also asked people to keep emergency kit ready. While fishermen have been asked to keep a radio set with extra batteries handy.

Stating the Dont's, the state government asked the people not to spread or believe rumours. It also asked them not to drive or ride any vehicle during the cyclone. The administration advised people not to allow oil or any flammable substances to spill clean them immediately. And ordered fishermen not to venture into the sea. Cyclone Nisarga to Make Landfall in Maharashtra's Alibaug Between 1 to 4 PM, Wind Velocity in Mumbai to be 110 Kmph: IMD

Here's What the Maharashtra CMO said:

Earlier, IMD Director Mrutyunjay Mohapatra said that four districts of the state would be severely affected, including Mumbai Metropolitan Region, Thane, Raigad and Palghar. He also said that Nisarga will make landfall in Maharashtra between 1 to 4 pm and wind velocity will be around 110 kmph in Mumbai at the time of landfall.

Meanwhile, Meanwhile, Maharashtra Chief Minister Uddhav Thackeray on Tuesday said that people who live in temporary or weak houses will be shifted to relief camps, adding that precautions would be taken during the relief and rehabilitation works, considering the prevalence of COVID-19. He had also asked people to stay indoors for two days. Also, ahead of the cyclone Nisarga, the Mumbai police imposed Section 144, prohibiting the movement of public on beaches, promenades and other places near to the coastline.

(The above story first appeared on LatestLY on Jun 03, 2020 11:37 AM IST. For more news and updates on politics, world, sports, entertainment and lifestyle, log on to our website latestly.com).