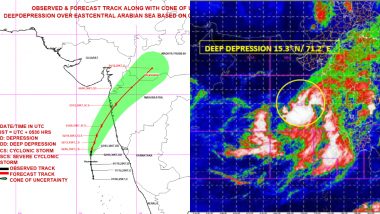 Mumbai, June 3: Cyclone Nisarga, which will make a landfall as a "severe cyclonic storm", will hit the coast of Maharashtra in Alibaug at around noon today. The cyclone's brunt would be faced by the entire coastline stretching from Daman to Harihareshwar, located nearly 184 km from Mumbai. The state capital would also come in ire of the cyclonic storm, with winds as high as 100-110 kmph being feared to hit the city. The coastal areas of Gujarat have also been put on alert. Nisarga Cyclone Tracker: Cyclonic Storm to Turn Into Severe Cyclonic Storm by June 3; Check Forecast and Day-Wise Movement.

The Maharashtra government has barred residents from venturing near the sea, beaches or coastline till the threat of cyclone subsides. The India Meteorological Department (IMD) has also issued a warning for fishermen. The sea condition is rough to very rough over Arabian Sea till evening of June 3. Fishermen are advised not to venture into the Arabian Sea and along and off  Karnataka-Goa-Maharashtra-south Gujarat coasts till June 3, the weather body said.

The India Meteorological Department (IMD) has said that Cyclone Nisarga will turn into severe cyclonic storms and cross Maharashtra and Gujarat coast between Harihareshwar and Daman, close to Alibag in Maharashtra's Raigad district on Wednesday afternoon. A total of 15 teams of National Disaster Response Force (NDRF) have been deployed in Maharashtra as a precautionary measure.

According to IMD Director General Mrutyunjay Mohapatra, the severe cyclonic storm would have a wind speed of 90-105 kmph when it crosses the coast on June 3. It must be noted that Nisarga will be the first cyclone to hit Maharashtra coast in June this year, after May 1961. The cyclonic storm will affect Mumbai and other coastal districts of Maharashtra, Gujarat and neighbouring states.

(The above story first appeared on LatestLY on Jun 03, 2020 09:13 AM IST. For more news and updates on politics, world, sports, entertainment and lifestyle, log on to our website latestly.com).