A Mewat-based gang, impersonating as Crime Branch sleuths and legal officials of YouTube, has been busted by Delhi Police for extorting money from gullible people by honey-trapping them. 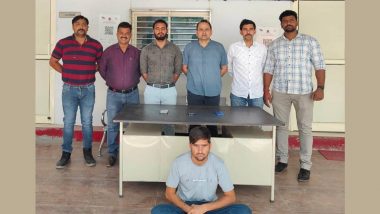 New Delhi, May 16: A Mewat-based gang, impersonating as Crime Branch sleuths and legal officials of YouTube, has been busted by Delhi Police for extorting money from gullible people by honey-trapping them.

The police have arrested one person in connection with the case, who has been identified as Asib Khan (26), a resident of Bharatpur district in Rajasthan, the police said.

Accordingly, the police registered an FIR under Section 384 (Punishment for extortion) of the Indian Penal Code at the cyber police station in the north district.

After lodging a case, a police team was constituted which conducted money trails and mounted technical surveillance/analysis of the mobile phone numbers linked to various mobile wallets.

The investigation revealed that the accused were operating from Mudiya village in Bharatpur district.

Subsequently, the police conducted a raid and detained Asib Khan.

"His mobile phone was checked. It was revealed that he was operating a fake bank account using internet banking," the DCP said.

Further analysis of bank statements disclosed that Rs 26 lakh were credited and then instantly debited from this account within one month.

Thereafter, it was found that one person, a resident of Sarai Rohilla, Delhi, was being extorted. The police then registered another case of extortion and arrested the accused Asib Khan.

During interrogation, it was revealed that several youth from Asib Khan's village would create fake Facebook profiles of girls and contact victims on WhatsApp after exchanging mobile numbers via Facebook Messenger.

The victims would receive WhatsApp video calls in which a pre-recorded video of a lady doing an obscene act would be played and this video would appear on the mobile screen of the victims. The accused caller then screen-recorded the video of the victim indulging in obscene acts.

They used to then blackmail the victims posing as officials from the Crime Branch and YouTube's legal team.

(The above story first appeared on LatestLY on May 16, 2022 08:36 PM IST. For more news and updates on politics, world, sports, entertainment and lifestyle, log on to our website latestly.com).