Charges have also been framed under sections 451 (house trespass), 392 (robbery), 427 (mischief causing damage to the amount of fifty rupees). Two additional charges have been framed against Mithhan, which include sections 109 (Punishment of abetment) and 114 (abettor present when the offence is committed). 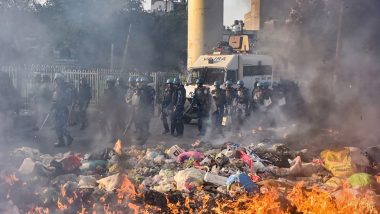 New Delhi, November 22: A Delhi court has framed charges of arson and rioting against a father-son duo for allegedly damaging and setting a Mosque on fire, vandalism, and stone-pelting during the February 2020 riots.

Mithhan Singh and his son Jony Kumar are accused of allegedly being part of a violent mob that raised slogans “Jai Shree Ram” and damaged the mosque in Delhi's Khajuri Khas area on February 25, 2020, as per the complainant.

Additional Sessions Judge Virender Bhat framed charges under requisite sections against the two accused and explained it to them in vernacular in the presence of their lawyers, to which they pleaded not guilty and claimed trial in the case.

The judge, in an order dated November 20, also rejected the argument put forth by the counsel of the accused that they are entitled to be discharged in the case as there was a delay in reporting of incident and recording of statements of the witnesses.

He said that accused can not claim discharge merely on this score. The court said that the delay in recording witnesses' statements was not intentional and was occasioned on account of the situation which prevailed in the area during and after the incident of rioting.

“There was an atmosphere of terror and trauma which prevailed in the area for several days even after the riots. In these circumstances, the delay of about one week in reporting the incident to the police would appear justified and can not be considered fatal to the prosecution case at this stage,” the court further said.

As per complainant Israfil, Mithhan Singh and his son Jony Kumar were allegedly part of the violent mob that raised slogans “Jai Shree Ram” on February 25, 2020, near his house and set it ablaze. This prompted the complainant to climb the Fatima Masjid to save his life, he stated, adding that the mob then damaged the mosque and set it on fire.

Mithhan Singh also exhorted his son to throw a small gas cylinder into the mosque, he alleged. Following this, the father-son duo, along with the mob threw bottles containing inflammable material upon the houses belonging to a particular community, the complainant claimed.

The Special Public Prosecutor told the court that apart from Israfil, eyewitnesses Mohd Tayyub, Mehboob Alam, Shadab, and Mohd Akram had also seen the two accused in the mob damaging and setting ablaze their houses as well as Fatima Masjid.

He argued that given clear-cut statements of these witnesses, who knew the two accused very well as all of them resided in the same neighborhood, it is manifested that the two accused had resorted to vandalism, stone pelting, and burning of private and public properties.

On the other hand, counsel for the duo argued that they have been falsely implicated and that the witnesses were planted by the police. The judge, however, held that charges under sections 147 (rioting), 148 (rioting, armed with a deadly weapon), Section 149 (member of unlawful assembly guilty of the offence committed in prosecution of common object), 436 (mischief by fire or explosive substance) of IPC are liable to be framed against the duo.

Charges have also been framed under sections 451 (house trespass), 392 (robbery), 427 (mischief causing damage to the amount of fifty rupees). Two additional charges have been framed against Mithhan, which include sections 109 (Punishment of abetment) and 114 (abettor present when the offence is committed).

Under the Code of Criminal Procedure (CrPC), an accused should be informed of the offence under which he is charged. The basic purpose of the charge is to let them know of the offence that they are charged with so that they can prepare a defence.

Communal clashes had broken out in northeast Delhi in February 2020, after violence between the Citizenship (Amendment) Act supporters and its protesters spiraled out of control leaving at least 53 people dead and over 700 injured.