Prime Minister Narendra Modi said on Sunday that the idea of 'Ek Bharat, Shreshtha Bharat' is to bridge distances between different parts of the country. 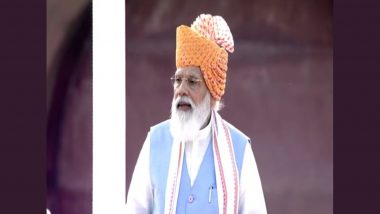 Jammu, April 24: Prime Minister Narendra Modi said on Sunday that the idea of 'Ek Bharat, Shreshtha Bharat' is to bridge distances between different parts of the country.

Addressing a mammoth rally at Palli Gram Panchayat in Samba district, Modi said, "The day is not far away when the Devi of Kanyakumari will meet Vaishno Devi with a single road.

"When I speak about 'Ek Bharat, Shreshtha Bharat', our focus is on connectivity and bridging distances. Our aim is to provide all-weather connectivity to J&K.

"Work is going on at fast pace to give new impetus to development of Jammu and Kashmir which is also an example of 'sabka saath, sabka vikas," Modi said.

Speaking of the recent boom in tourism industry of Kashmir, the Prime Minister said that tourism is also thriving in the valley again. Speaking about the transparency in the functioning of the government, he said, "Earlier, a file that was initiated for the development of J&K took 2-3 months to reach the state, today, it reaches the state within three weeks."

He said many investors have now come forward to invest in J&K and this would give an impetus to both employment and industry here. "A new story of development is being written in Jammu & Kashmir. Many private investors are interested to come to J&K," he said.

Speaking about the lack of opportunities to the underprivileged classes in J&K in the past, he says, "Those who did not get the benefit of reservation for years in Jammu and Kashmir are now getting the benefit of reservation. "All the schemes of the central governments are being implemented in the Valley. People are using the schemes to their benefits," he said. West Bengal Post-Poll Violence Case: CBI Summons Anubrata Mandal For Questioning in Ongoing Investigation.

"Today, Jammu and Kashmir is presenting a new example for the whole country. In the last few years, Kashmir has created a new dimension for law and development.

(The above story first appeared on LatestLY on Apr 24, 2022 04:50 PM IST. For more news and updates on politics, world, sports, entertainment and lifestyle, log on to our website latestly.com).