Every year, the smoke from stubble burning causes pollution in Delhi. This has been continuing for many years now, but no state government has provided any effective solution to the problem of stubble burning. 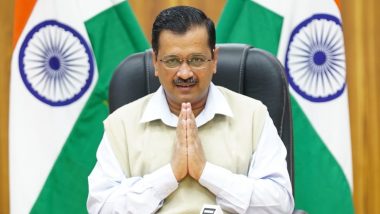 New Delhi, November 5: Chief Minister Arvind Kejriwal on Thursday appealed to the citizens of Delhi to join in the Diwali celebrations this year by performing Lakshmi Puja at their homes. He said that he will be performing Lakshmi Puja along with other Delhi Cabinet Ministers on the day of Diwali, which will be live-streamed by TV channels. He also appealed to the people of Delhi to avoid bursting firecrackers this Diwali in view of increasing air pollution. He said that he hoped this is the last year when North India will suffer due to pollution because Delhi has provided a sustainable alternative to stubble burning with the newly-developed bio-decomposer technique.

Addressing a digital press conference, CM Shri Arvind Kejriwal said, "There are adverse effects of both Corona and pollution in Delhi this year. The Delhi government, along with the people of Delhi, are making all efforts to deal with the issue. The situation of Corona is deteriorating due to pollution. Delhi Air Pollution: Arvind Kejriwal Bans Manufacturing Activity in New Industrial Areas; Only Hi-Tech, Services Industries Permitted.

Every year, the smoke from stubble burning causes pollution in Delhi. This has been continuing for many years now, but no state government has provided any effective solution to the problem of stubble burning. I have spoken to many farmers in the neighbouring states, who say they do not want to burn stubble because it kills the good bacteria on the farmlands, makes the soil infertile, and causes major pollution. But, they do not have any option because they are provided with no alternative to the problem.

"But the pollution is at its peak right now, and we are seeing how Delhi is covered in pollution. Last year, we had vowed to not burn crackers on Diwali. We had celebrated Diwali together at Connaught Place through a light show. We will celebrate Diwali together this year as well, without burning crackers. If we burn crackers, we will be playing with the health of our children and our family. We are arranging for something different for Diwali this year," he added. Delhi Govt Has Provided Cheap and Effective Alternative to Stubble Burning, Says CM Arvind Kejriwal.

CM Shri Arvind Kejriwal said, "On November 14, at 7:39 PM, we will perform Lakshmi Puja together. I will be performing Lakshmi Puja along with the Cabinet Ministers, which will be telecasted live from some TV channels. I wish to appeal to my brothers and sisters in Delhi to join in the puja celebrations. I believe that when the people of Delhi will perform Lakshmi Puja from their homes at the same time, celebrating the coming back of Lord Rama after 14 years of vanvaas, celebrating the coming of Lakshmi Ji, it will generate a very positive atmosphere and good vibes in Delhi. I believe it will be good for the people of Delhi, it will be for the good of every family."