A 28-year-old woman in Gujarat has lodged a complaint against her husband, saying he has given her triple talaq and has been living with his two girlfriends. 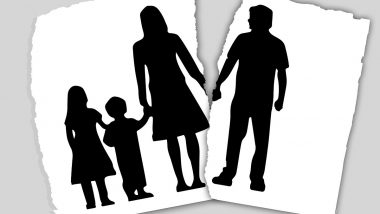 Ahmedabad, January 7: A 28-year-old woman in Gujarat has lodged a complaint against her husband, saying he has given her triple talaq and has been living with his two girlfriends. According to the woman, who hails from Juhapura, they got married 10 years ago and her husband would beat her over petty issues. She had filed a complaint of domestic violence in 2016 but withdrawn following the intervention of family members and community leaders. Woman Given Triple Talaq Over Phone by Husband, Madhya Pradesh CM Shivraj Singh Chouhan Assures Help.

In her complaint, according to a TOI report, the woman said that her husband would often thrash her over petty issues. He would come home late and sometimes did not turn up at all, she said. Whenever she questioned him about his whereabouts, he used to beat her, she added. About a month ago, the woman stated, her husband had gone to Delhi. He returned with his two girlfriends and shifted to a flat in Fatehwadi. Hyderabad Woman Given Triple Talaq Over Phone by American Husband.

When the woman confronted him, he uttered "talaq" thrice and threw her out of his home. Her family members and community leaders tried to persuade the accused to leave his two girlfriends but he refused, the report said. The couple has two minor daughters. Following the complaint, police have booked the man for domestic violence and under the Muslim Women (Protection of Rights on Marriage) Act.

The act was passed by Parliament on July 31, last year, abolishing the practice of triple talaq. On August 1 last year, President Ram Nath Kovind gave his assent to the legislation. The accused now faces a jail term of three years if found guilty by the court.

(The above story first appeared on LatestLY on Jan 07, 2021 11:43 AM IST. For more news and updates on politics, world, sports, entertainment and lifestyle, log on to our website latestly.com).