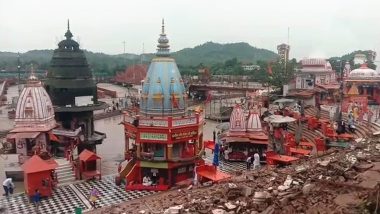 Haridwar, July 21: Due to incessant rains and lightning strikes, a wall near Har Ki Pauri in the holy town of Uttarakhand's Haridwar collapsed in the wee hours of Tuesday. According to reports, lightning struck near sanctum sanctorum Brahmakund at Har Ki Pauri following which the wall collapsed and a transformer caught fire. Uttarakhand Govt Imposes Complete Lockdown on Saturdays And Sundays in Dehradun, Haridwar, Udham Singh Nagar and Nainital, Exempts Essential Services.

As the transformer was damaged, power supply was disrupted in the area. In the incident, no one was injured. The wall was built in 1935. After hearing the explosive sound, local priests, Ganga Sabha office bearers, police personnel and residents arrived at the spot.

Uttarakhand: A wall near Har Ki Pauri collapsed in an incident of a lightning strike in Haridwar last night. No injuries reported. pic.twitter.com/mXZAj7MgoN

Meanwhile, the cops have cordoned off the whole area as the remaining portion of the wall also seems vulnerable. Akhil Bharatiya Akhada Parishad has demanded an inquiry into the incident as the Mahakumbh is just five months away and thousands of people visit the temple during that time.

This development comes a day after at least three people were killed due to cloud burst in Uttarakhand's Pithoragarh district. "Three people in the Madkot village lost their lives while 8 people from a neighbouring village are missing following a cloud burst. A rescue team is present at the spot," District Magistrate Pithoragarh V K Jogdande was quoted as saying by ANI.

(The above story first appeared on LatestLY on Jul 21, 2020 04:49 PM IST. For more news and updates on politics, world, sports, entertainment and lifestyle, log on to our website latestly.com).