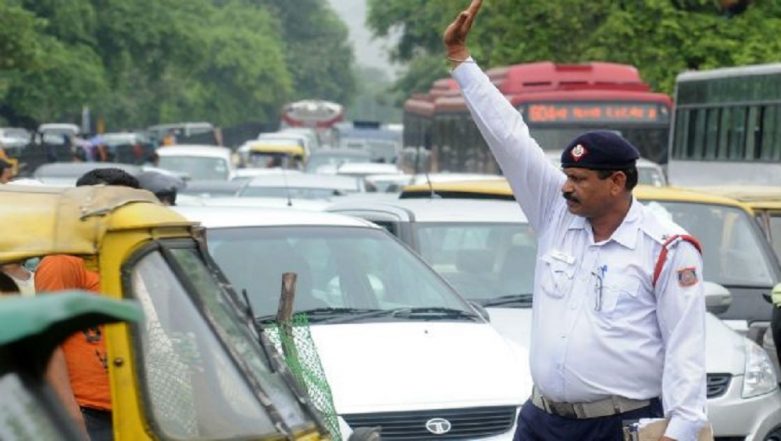 Post the tightening of regulations for violators of traffic laws, just two states - Haryana and Odisha -- have seen collection of a whopping Rs 1.41 crore through challans in just four days, officials said on Thursday. On July 31, Parliament had passed the Motor Vehicles (Amendment) Bill, 2019 that had provisions for stricter and heavier penalties for violations in an attempt to improve road safety.

The Bill got President's assent on August 9 and is applicable pan India from September 1. "As per information from Odisha Motor Vehicles Department, a total of 4,080 challans have been issued for violations of traffic laws with total collection of Rs 88.90 lakh," a Road Transport and Highways official said. In addition 46 vehicles were seized there. Gurugram Traffic Police Imposes Rs 59,000 Fine on Trolley Driver for Drunken Driving Under Motor Vehicles (Amendment) Act 2019, Cops in Bhubaneswar and Bengaluru Follow Suit.

In Haryana, the official said, 343 challans were issued for violations with collection of Rs 52.32 lakh. In Delhi 3,900 challans were issued on the very first day of the implementation of the new Act, as per reports. India accounts for 5 lakh road accidents annually, one of the largest in the world. Out of the 5 lakh accidents around 3 lakh people suffer grievous injury, while as many as 1.5 lakh succumb to death.

Road Transport and Highways Minister Nitin Gadkari said the new Act will result in minimising accidents and saving precious lives as this will instill fear and respect for law among violators. "States are in line with centre in implementing these sections of The Motor Vehicles (Amendment) Act, 2019 in letter and spirit," the official said.

The legislation provides for stricter punishment for various traffic related offences as well as higher penalties, including a compensation of Rs 5 lakh for death and Rs 2.5 lakh for grievous injury in a motor vehicle accident case. The Act provides for a penalty of Rs 10,000 fine for not giving way to emergency vehicles and Rs 10,000 for driving despite disqualification. Penalty for dangerous driving has been increased to Rs 5,000 from Rs 1,000, while drunken driving under the new law attracts a fine of Rs 10,000.

Penalties for over-speeding range from Rs 1,000- 2,000 for over-speeding. Driving without insurance is punishable with Rs 2,000 fine, while driving without helmets will attract Rs 1,000 penalty and 3-month suspension of licence. Also, the guardian/owner will be deemed guilty in case of road offence by juveniles, while registration of the vehicle will be cancelled.

Penalty for unauthorised use of vehicles without licence has been fixed at Rs 5,000 while those driving without licence will have to shell out the same amount and those found driving despite disqualification would be fined Rs 10,000. The penalties are based on the recommendations of transport ministers from 18 states, which were vetted by a standing committee of Parliament.

Meanwhile another official said the States/UTs are working out modalities for notification in their respective States/UTs regarding compounding under section 85 of the Amendment Act (Section 200 of the Principal Act). "The states are in the process of issuing notification for compounding of offences under the Motor Vehicles Act (Amendment) Act, 2019. ...Chief Minister or Minister's approval is required," the official said.