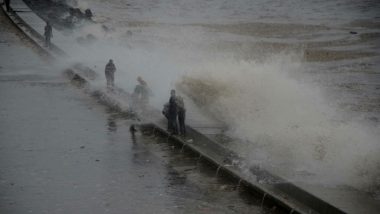 Mumbai, July 6: A high tide with a wavelength of upto 4.67 metre is expected to hit the Mumbai coast at 1:03 pm today, said the Brihanmumbai Municipal Corporation (BMC) in its update early on Monday. The high and low tide timings are observed in Mumbai on daily basis, as the city is located on the coastal edge of Maharashtra. IMD Predicts Heavy Rainfall to Continue in Mumbai Till Monday, Advises Fishermen Not to Venture Along the Coast.

In the Monsoon months, the high tide timings are crucial for the civic department to plan alternative form of drainage in wake of incessent rainfall. During the period when high tide persists, the exit points of city's drainage into the sea is closed to prevent the inward flow of sea water.

The period of high tide, if combined with incessent rainfall, leads to flash floods in the city. The major instances of water-logging, over the past decade in Mumbai during Monsoon months, have been linked to the high tide hours.

During the period of high tide, fishermen and locals are warned against venturing near the sea. The latter, in general, are asked to track the IMD guidelines to plan the fishing activities. Penetrating away from the coastline for fishing is mostly suspended during the peak of Monsoon season.

(The above story first appeared on LatestLY on Jul 06, 2020 10:29 AM IST. For more news and updates on politics, world, sports, entertainment and lifestyle, log on to our website latestly.com).