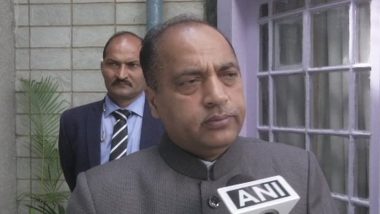 The security personnel who were tested COVID-19 positive accompanied the Chief Minister on his visit to Kangra. After they were found to be infected, those officials who came in contact with them in Kangra district wee asked to undergo tests for coronavirus. Himachal Pradesh Extends Lockdown in Containment Zones Till August 31, Removes Night Curfew.

Thakur is also expected to be examined for the virus. His swabs were collected last month after a deputy secretary in the Chief Minister's Office (CMO) had tested positive for the disease. The CM was, however, found to be negative.

In the past week, Himachal Pradesh Power Minister Sukh Ram Chaudhary tested positive for the virus. His two daughters and personal security officer were also found infected. Chaudhary is undergoing treatment at the Deen Dayal Upadhyay Hospital in Shimla.

Across Himachal, a total of 3,816 cases of coronavirus are reported so far, which includes 2,435 active cases and 17 deaths. In the past 24 hours, the tally of infections went up by 180.

(The above story first appeared on LatestLY on Aug 13, 2020 10:23 PM IST. For more news and updates on politics, world, sports, entertainment and lifestyle, log on to our website latestly.com).