Over 40 persons are feared buried under the debris of a major landslide in Himachal Pradesh's Kinnaur district on Wednesday, Deputy Commissioner Abid Hussain Sadiq said. 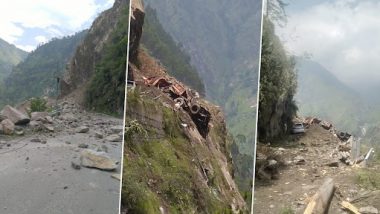 Sadiq told PTI that several vehicles, including a Himachal Road Transport Corporation (HRTC) bus carrying over 40 passengers, are buried under the debris.

Once again a big landslide hits tribal district of Kinnaur in Himachal pradesh .As per the latest reports one HRTC bus,one truck and a few light vehicles are said to be buried under this https://t.co/kLX1WpWw1q many people are inside these vehicles is being ascertained.. pic.twitter.com/pBNRi7W98r

The bus was on its way from Reckong Peo in Kinnaur to Shimla, he said. The Army, National Disaster Response Force (NDRF) and local rescue teams have been called in for the rescue work, the Kinnaur deputy commissioner said.

Major accident in #HimachalPradesh's #Kinnaur due to mountain collapse pic.twitter.com/D0HMqF0frn

Sadiq also said shooting stones are still falling which is creating problems in carrying out the rescue operation. More details are awaited, he added.