Setting an example for other farmers in the country Amresh Singh, a farmer from Bihar, is cultivating 'Hop shoots,' the world's most expensive crop. His farm-grown vegetables are being sold for one lakh rupees per kilogram in Bihar. 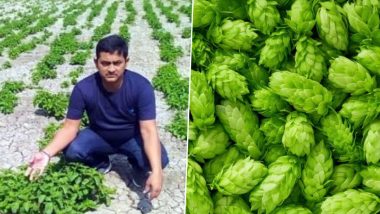 Setting an example for other farmers in the country Amresh Singh, a farmer from Bihar, is cultivating 'Hop shoots,' the world's most expensive crop. His farm-grown vegetables are being sold for one lakh rupees per kilogram in Bihar.

The farmer from Bihar has taken a big risk and is now creating a heavy buzz on social media.

Hailing from Karamnidh Village in the Aurangabad district of Bihar Amresh Singh, 38 is the first person in India to take such a risky step. The saplings were purchased by him from the Indian Vegetable Research Institute in Varanasi. Hops were previously uncommon in Indian markets and were only purchased on special orders with lengthy long times. Morel Mushrooms Grow in J&K, Know Everything About Kanagaech or Gucci, One of The World's Most Expensive Edible Mushrooms (View Pic).

What are hop shoots?

The hop - called Humulus lupulus - a member of the Cannabaceae family of flowering plants. Hop shoots were believed to be weed until their properties were known. The United States is a major hops-producing country in the world followed by Germany.

What makes it so special?

The antioxidants in the vegetable can also help to achieve beautiful skin. Hop shoots are difficult to harvest, which contributes to their high cost. They grow haphazardly, and picking them necessitates hunching for long periods of time. Since they are so small, one may need to choose many shoots to fill one pack.

Farming of Hop-shoot is popularly practiced in European countries, United Kingdom, US, Germany, and others.

Many farming communities in India are confidently taking risks in increasing productivity by introducing new agricultural methods with the aid of modern technology.

Cultivating this crop in India can keep Indian farmers afloat in a competitive market. This can be surely a game-changer for the farming community.

(The above story first appeared on LatestLY on Apr 03, 2021 02:32 PM IST. For more news and updates on politics, world, sports, entertainment and lifestyle, log on to our website latestly.com).