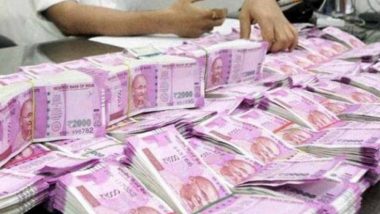 Beijing, August 11: The Income Tax department on Tuesday busted a network of Chinese companies involved in Hawala transactions in India. The sleuths of I-T department raided a total of 21 companies based in Delhi, Ghaziabad and Gurugram region. The shell entities were being used for executing money laundering activities, reports citing officials said. India-China Face-Off: Tensions at Sino-Indian Border 'Not Over', Say Experts.

"Based on info that few Chinese individuals and their Indian associates were involved in money laundering and hawala transactions through series of shell entities, search action was mounted at various premises of these Chinese entities, their close confederates and bank employees," said a statement issued by the Central Board of Direct Taxes (CBDT) following the raids.

"Search action revealed that at the behest of Chinese individuals, more than 40 bank accounts were created in various dummy entities, entering into credits of more than Rs 1,000 crores over the period," the CBDT further added.

21 Locations Raided by IT Department, '1 Arrested'

Peng real name is Luo Sang. He was representing many Chinese companies in India for hawala operations spread across several States: Govt sources.

One Chinese national was arrested during the raid, said reports. An official confirmation was, however, awaited. The accused was identified as Charlie Pang in the preliminary reports. He was allegedly caught with a fake passport and was using 8-10 bank accounts under fictitious names.

Reports claimed that Pang's real name was found to be Luo Sang. An official confirmation on his arrest is expected to elicit a response from the Chinese embassy. The action by India's tax authorities comes amid friction in ties with China, with both countries being locked in a face-off at the Ladakh border since the past 12 weeks.

(The above story first appeared on LatestLY on Aug 11, 2020 10:07 PM IST. For more news and updates on politics, world, sports, entertainment and lifestyle, log on to our website latestly.com).