India is on the path of progress and those who will come in between will be wiped out, Bhagwat said on Wednesday. 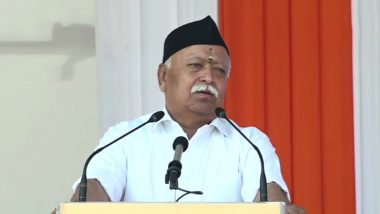 As per the predictions of saints and astrologers, India will become 'Akhand Bharat' in 20-25 years but if we all collectively work towards it, the target will be achieved in 10-15 years, he claimed.

He was in Haridwar for inaugurating the statue of 1008 Swami Divyanand Giri at Shri Krishna Niwas and Poornanand Giri Ashram in Kankhal.

India is on the path of progress and those who will come in between will be wiped out, Bhagwat said on Wednesday.

Lord Krishna lifted the Goverdhan mountain on his little finger, but fellow cowherds thought it was due to the support of their sticks. Similarly, we all will make efforts but if the saints will join in, then Swami Vivekanand, Maharishi Arvind's dream of Akhand Bharat will be realised soon. Dharma and Bharat are synonymous.

"Our nationality is flowing like the flow of the Ganga. If dharma will be promoted, the country will rise," he added.

"For 1,000 years, efforts were made to end sanatan dharma, they failed, but we and the dharma are still intact," he added.

After coming to India, the evil tendencies of every type of person end, he added.

(The above story first appeared on LatestLY on Apr 15, 2022 03:07 PM IST. For more news and updates on politics, world, sports, entertainment and lifestyle, log on to our website latestly.com).