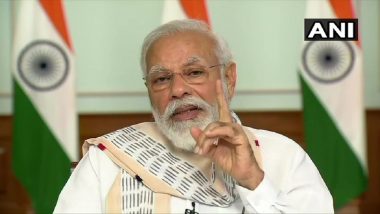 New Delhi, Sep 13: As the IANS C Voter Covid-19 Tracker completes six months of tracking, it is clear that India's faith in Prime Minister Narendra Modi's handling of the situation remains rock solid with 75.8 per cent of the people endorsing the strategy of the government.

Over the last six months, the IANS C Voter Covid-19 Tracker has brought to you data and analysis to capture India's mood during the pandemic, one of the most unprecedented and disruptive events in the history of mankind.

The IANS C Voter Covid-19 Tracker is one of a kind poll and tracker in India covering the pandemic and consequent impact and the mood of the people.

Week after week, we have brought to you comparisons and changes in the mood of India and tracked variables like Trust in Government, Index of Panic, Index of Complacency, Index of Preparedness, changes in income and employment and the prevalence of Covid-19 symptoms.

The one constant in the tracker over the last six months has been Prime Minister Modi's high approval ratings on the handling of the Covid-19 pandemic.

However, the approval ratings are not as high in the earlier months of the pandemic and the economic hardship is playing out longer. This number is off the highs of 80 and 90 per cent support seen in the months of April, May and June.

As per the latest reading, 75.8 per cent respondents to the survey agree that the Indian government has handled the situation well while 20.5 disagree leaving the net agree number at 55.3 per cent.

To a question on "I am afraid that either myself or someone in my family may actually catch the coronavirus", representing the Index of Panic, 49.8 per cent agree while 46.1 per cent disagree leaving a very slim majority for the agree camp at 3.7 per cent. This means that more people are afraid of catching the virus but with a very slim majority.

This number is now much lower than previous months indicating that people are less in panic mode. The sample size of the latest tracker is 4,853.

Covid-19 cases have been mounting in recent months and the latest daily addition is more than 95,000 cases in a single day.

To a question in the tracker on "I believe the threat from the coronavirus is exaggerated", 56 per cent agree while 33.5 per cent disagree. This means that 22.5 per cent overall agree that the threat is exaggerated. This is a little surprising after the total number of cases has crossed 46.6 lakh cases but the recovery rate has been strong and people are beginning to live with the pandemic.

The Index of Preparedness shows that 52.7 per cent people have stocked up on rations and medicines for more than three weeks 47.7 per cent have supplies less than that.

So, for more than half or 51.75 per cent, salary and income has reduced for the working members of the family.

(The above story first appeared on LatestLY on Sep 13, 2020 09:19 AM IST. For more news and updates on politics, world, sports, entertainment and lifestyle, log on to our website latestly.com).