The Day is observed worldwide to strengthen action and cooperation in achieving the goal of a sustainable world free of substance abuse. The Ministry of Social Justice & Empowerment, which is the nodal ministry for Drug Demand Reduction, implements various programmes for the drug abuse prevention across the country. 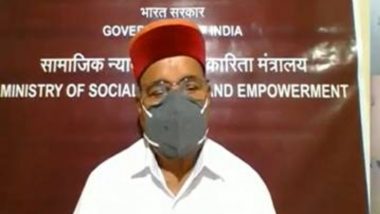 The Day is observed worldwide to strengthen action and cooperation in achieving the goal of a sustainable world free of substance abuse. The Ministry of Social Justice & Empowerment, which is the nodal ministry for Drug Demand Reduction, implements various programmes for the drug abuse prevention across the country.

Secretary, Social Justice & Empowerment, Mr. R. Subrahmanyam gave the introductory remarks at the programme and the address was given by the Additional Secretary , Ms. Upma Srivastava. Joint Secretary, Ms. Radhika Chakravarthy explained details about the NMBA and conducted the programme .

Addressing the program today, SJ&E Minister Shri Thawaarchand Gehlot said that on the special occasion of International Day Against Drug Abuse and Illicit Trafficking, we have come together to strengthen our determination against drug abuse in any form and to send a message to the world that India will leave no stone unturned to fight against this evil. It also reaffirms our commitment to achieve social goals, initiatives to end drug abuse and strengthen community-centric approaches and outcomes. Sh Gehlot expressed the resolve that India is committed to root out the menace of drug abuse at any cost.

Shri Gehlot stated that according to the National Comprehensive Survey conducted by the Ministry of Social Justice and Empowerment, there are more than 60 million drug users in the country of which a large number of users are in the age group of 10-17 years.

The Minister explained that the Ministry is the nodal Ministry for drug demand reduction. This Ministry has taken several steps to address the issues related to the sue of drugs and its effects. There are more than 500 voluntary organizations across the country, which are assisted financially under the NAPDDR scheme of the Ministry, he disclosed.

These NGOs have been actively involved in the implementation of drug-free India campaign. Volunteers and outreach workers of these institutions/organizations have gone from door to door, village to village and nearby localities, etc. to educate the people about the ill effects of drug abuse and have assisted the rehabilitation of victims of substance abuse.

The activities of Nasha Mukt Bharat Abhiyan, despite the situation arising out of COVID-19 in the country, have continued in full force, Shri Gehlot explained. The Minister urged that the common man must become a part of Nasha Mukt Bharat campaign since the evil can be eradicated from the society only with people’s participation. International Day Against Drug Abuse and Illicit Trafficking 2021: Mumbai Police Raises Awareness About Drug Misuse; Says ‘Don’t Snort Away Your Life-Line!’.

On this occasion, Sh. Ramdas Athawale said that a large number of lives have been ruined by the menace of substance abuse. There is a need to generate awareness about the ill-effects of this evil and we must put an end to the drugs trade. We need to achieve a drug-free India and the Ministry of Social Justice and Empowerment is very serious on achieving this end, he added.

Shri Ratan Lal Kataria in his speech said that the entire world is facing this menace and that drug addiction has devastating impact on the addict, individual, family and large section of the society and has become a matter of serious concern.

The Ministry of Social Justice and Empowerment has been mandated to reduce drug demand. It coordinates and oversees all aspects of drug abuse prevention including assessment of the extent of the problem, preventive action, treatment and rehabilitation of addicts, dissemination of information, and public awareness and is mandated to run de-addiction centers. The government provides financial assistance to NGOs across the country, Shri Kataria said. On this occasion, we must take a pledge to achieve a drug-free society, he added.

Addressing at the event, Shri Krishan Pal Gurjar said that we live in a world where the drug trade is taking a dangerous turn. Drugs not only ruin the life of the individual but are damaging for the family and society. Drug addiction has become a cause of concern for society and the country as well. The objective of the schemes made by the Ministry is to bring down the consumption of drugs and rehabilitate the addicts and we are going ahead with it with full determination, Shri Gurjar explained.

In the introductory remarks, Secretary, Deptt of Socila Justice Mr. R. Subrahmanyam said that last year we have started the campaign of 'Nasha Mukt Bharat Abhiyan'(NMBA) and a lot of work has already been done on the ground in this short span of time.

272 high burden districts were selected under NMBA. Nearly 8000 youth volunteers have been going door to door and canvassing against substance abuse. We hope that as a part of celebration of 75 years of Independence (Azadi Ka Amrit Mahotsav) we will soon be able to declare at least 100 districts drug free, the Secretary explained.

The Nasha Mukt Bharat Abhiyaan website launched today provides detailed information about the Abhiyaan and its activities, give glimpses through the Photo & video gallery, provides IEC resource material and information on the institutions set up by the Ministry with the aim of Drug Demand reduction.

Shri Thaawarchand Gehlot also launched the special Nasha Mukt Bharat Summit Edition of the Monthly newsletter which showcases the events that took place during the week-long summit along with the activities happening on-ground for the Abhiyaan across the country. A short film was also launched by the Minister made on the Nasha Mukt Bharat Abhiyaan depicting the activities undertaken for the Abhiyaan till now since its launch and the impact it has had on the ground. International Day Against Drug Abuse and Illicit Trafficking 2021: PM Narendra Modi Shares Message Against Drug Addiction, Says Drugs Bring Darkness, Destruction and Devastation.

The event concluded with the Minister interacting with the Master Volunteers who have been working for the Abhiyaan in their district who were selected from 5 districts and 3 persons who have overcome substance abuse and are now leading a healthy & happy life.

The ‘Nasha Mukt Bharat Abhiyaan’ or a ‘Drugs-Free India Campaign’ was flagged off on 15th August 2020 across 272 districts of the country found to be most vulnerable based on the data available from various sources. The focal points of the Campaign are preventive, mass education and sensitization, capacity building of service providers, positive partnership with educational institutions, and augmentation of treatment, rehabilitation and counselling facilities.

(The above story first appeared on LatestLY on Jun 26, 2021 08:38 PM IST. For more news and updates on politics, world, sports, entertainment and lifestyle, log on to our website latestly.com).