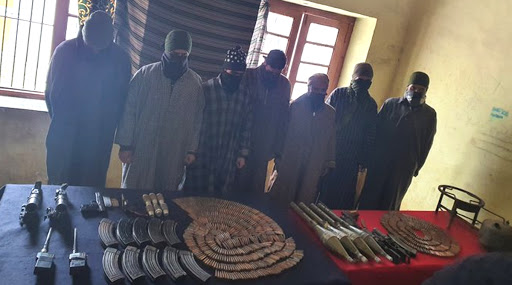 Srinagar, January 25: The Jammu and Kashmir police on Saturday informed that they have arrested seven sucpects -- allegedly over ground workers -- of Lashkar-e-Taiba and Hizbul Mujahideen outfits in an encounter. The police informed that all these people were arrested after a joint operation carried by Bandipora Police, Indian Army and CRPF.

According to the news agency ANI, the joint operation was carried out by the three elite forces after they received intelligence inputs about the presence of the suspected people in the Valley. Following the encounter, huge cache of arms and ammunition were recovered. Informing more, police said that the suspected were involved in harbouring and providing logistics support to militants. After the arrest, police have registered two FIRs under relevant sections of law. Jammu And Kashmir: Netflix, Amazon, Hotstar Feature in Whitelist Category of Home Ministry's Circular for Internet Access, Social Media Remains Banned.

The arrest comes days after grenade attack at Srinagar's Habab Chowk, where a group of Central Reserve Police Force (CRPF) jawans were stationed. In the meantime, Union Home Ministry on Saturday uplifted the ban on internet for pre-paid and post-paid mobile users. However, they have only allowed 300 websites that can be accessed by the people of the newly formed Jammu and Kashmir.