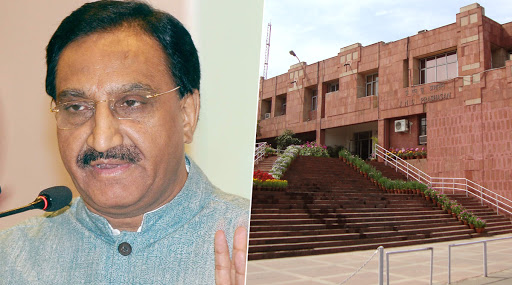 New Delhi, December 5: Union Minister of Human Resource Development Ramesh Pokhriyal on Thursday informed the Rajya Sabha that the Central government had increased the room rent in Jawaharlal Nehru University students after 40 years. The HRD minister stated that the fees were raised to meet the increased expenditure on the maintenance of hostels and to run them on no profit no loss basis.

Answering a question in the Upper House during the Winter Session, Pokhriyal said, "JNU has informed that to meet the increased expenditure on the maintenance of hostels and to run them on no profit no loss basis, it has increased room rents after about 40 years." JNU Explains Rationale Behind Fee Hike, Says University Has a Deficit of Rs 45 Crores, So 'Levying Service Charge is Necessary'.

Apart from this, the Centre had proposed a mufti-fold hike and added a new service charge of Rs 1,700 per month, which would take the monthly hostel fee up to Rs 2,000-2,300. However, other costs including establishment (Rs 2,200 per annum), mess (Rs 3,000 per month) and annual fees (Rs 300) remain the same. Following the proposed hike in the fee is granted, JNU will become the most expensive central university in the country.

It is to be known that the students and the teachers of the prestigious public-funded university have been demanding the rollback of the proposed fee hike, which might force 40 percent of the students -- below the poverty line category -- to leave the university. As per to an estimate, the new revised charges of JNU -- annual hostel fee and mess fees -- mount to a whopping Rs 55,000 - Rs 61,000, which currently stands at Rs 27,000 - Rs 32,000 annually.